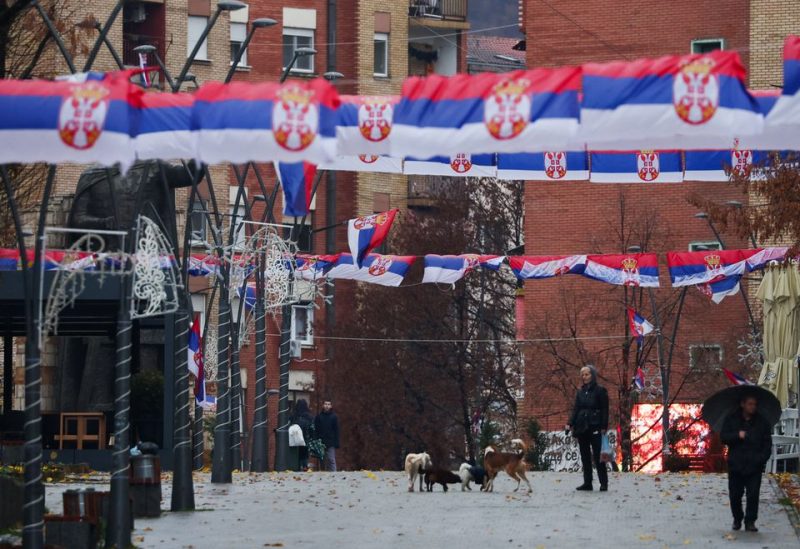 After tensions in the volatile north of the country erupted, Kosovo Serbs and the local police traded gunfire on Saturday.

A former member of the Kosovo police who resigned from his position last month along with other ethnic Serbs was arrested earlier in the day, and Serbs from northern Kosovo blocked major roads in the area to protest.

With a crisis mounting in the majority Serb north, Kosovo’s president Vjosa Osmani on Saturday announced that local elections in that area would be delayed until April 23. Elections had been scheduled for Dec. 18 but Serbs said they would boycott the polls.

Police said the blockade halted traffic and they were forced to close two border crossings between Kosovo and Serbia. Later, they said they came under fire in several locations close to a lake bordering Serbia. There were no immediate reports of injuries.

“Police units, in self-defense, were forced to respond with firearms to the criminals who were repulsed and run in unknown directions,” police said in a statement.

Gunshots were also heard in other locations in the northern part of the country.

Serb mayors in northern Kosovo municipalities, along with local judges and some 600 police officers, resigned last month in protest over a government decision to replace Belgrade-issued car license plates with ones issued by Pristina.

“Serbia has instructed its illegal structures to set up barricades in the north Kosovo. Belgrade bears the full responsibility for any escalation,” Blerim Vela, Kosovo’s presidential chief of staff said on Twitter.

Earlier, Kosovo police arrested another Serb on suspicion of taking part in an armed attack on a police patrol. On Thursday, a policeman was injured in an attack on a patrol after police ranks in the area had been reinforced by non-Serb officers following the mass resignations.

In an urgent press conference, Serbia’s President Aleksandar Vucic said he would ask NATO’s KFOR peacekeeper mission to let Serbia deploy troops and police in Kosovo, although he acknowledged there was no chance of permission being granted.

Kosovo declared independence from Serbia in 2008 with the backing of the West, following a 1998-1999 war in which NATO intervened to protect Albanian-majority Kosovo.