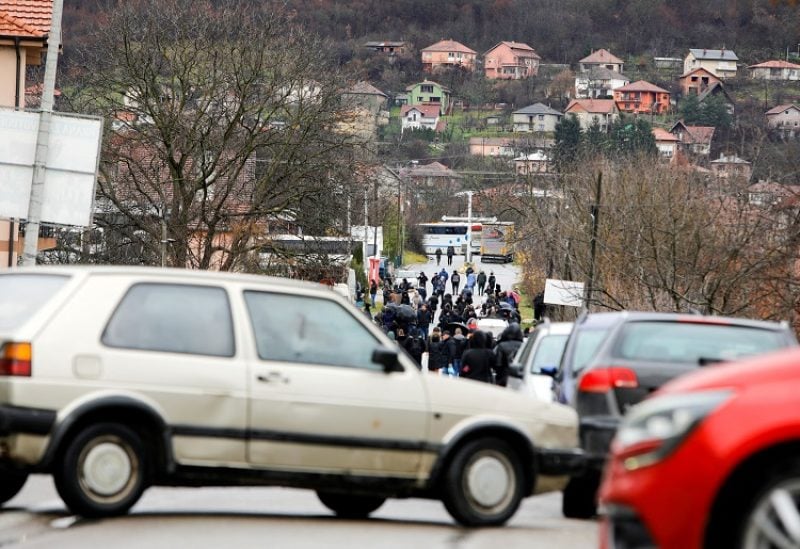 Serb protesters in northern Kosovo blocked main roads for a second day on Sunday following a nightime exchange of fire with police after the arrest of a former Serb policeman, amid rising tensions between authorities and Kosovo’s Serb minority.

They described scenes of explosions, roadblocks and gunfire after hundreds of Serbs gathered on Saturday morning to protest the arrest of a former police officer following a mass exodus of Serb officers from the force last month.

Local police say they were targeted by three firearm attacks. A contingent of EU police officers also said a stun grenade was thrown toward them.

“This attack, as well as the attacks on Kosovo Police officers, are unacceptable,” the EU’s rule of law mission (EULEX) said in a statement.

The EU’s foreign policy chief Josep Borrell also responded to the violence on Twitter, saying the “EU will not tolerate attacks on EULEX.”

“Barricades must be removed immediately by groups of Kosovo Serbs,” he said, adding that “All actors must avoid escalation.”

Local election postponed
The tensions stem from a dispute over banning Serbian license plates in Kosovo which led to hundreds of local mayors, judges and police officers resigning in protest.

As a result, Pristina called for elections to take place on December 18 which the main Serb political party said it would boycott.

Kosovar President Vjosa Osmani delayed the vote to April 23 on Saturday as the first roadblocks on the main border crossings with Serbia were set up.

France, Germany, Italy, the UK, the US and the EU all welcomed the postponement, calling it a “constructive decision” that “advances efforts to promote a more secure situation in the north.”

Decades of tension
Kosovo gained independence from Serbia in 2008 following a war in 1998-1999 that only ended with NATO intervention, although this has never been officially recognized by Belgrade.

The Serb minority in the north of Kosovo — which Belgrade has called on to defy orders from Pristina — accounts for around 120,000 of the total population of around 1.8 million, most of whom are ethnically Albanian.

In response to the rising tensions, Serbian President Alexander Vucic said he would request permission from NATO peacekeepers to send some 1,000 Serbian troops into the fragile region — although he conceded there was “no chance of the request being approved.”

“We do not want conflict, we want peace and progress, but we will respond to aggression with all the power we have,” he wrote on Facebook.