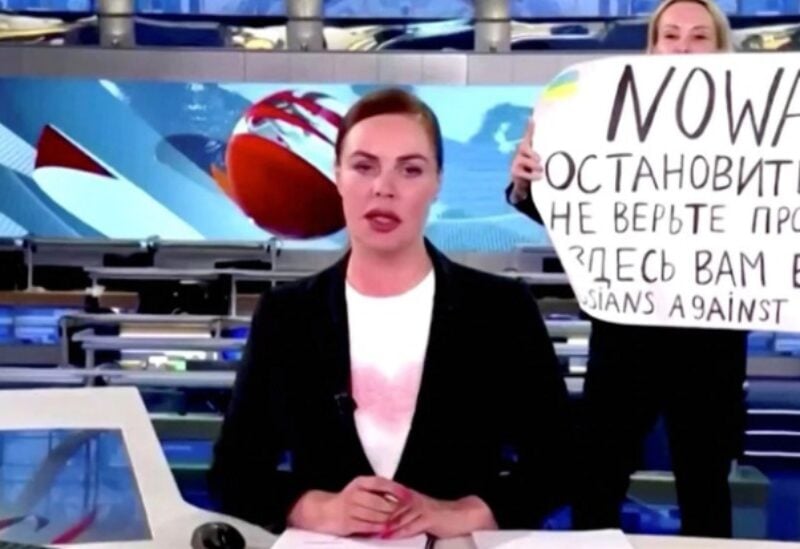 A person interrupts a live news bulletin on Russia's state TV "Channel One" holding up a sign that reads "NO WAR. Stop the war. Don't believe propaganda. They are lying to you here." at an unknown location in Russia March 14, 2022, in this still image obtained from a video uploaded on March 14. Channel One/via REUTERS

The Kremlin on Tuesday dismissed as “hooliganism” an act of dissent by a woman who interrupted a live news bulletin on Russia’s state television to denounce the war in Ukraine.

The protester held up a sign behind a studio presenter reading the news on Channel One on Monday night and shouted slogans condemning Russia’s Feb. 24 invasion of Ukraine.

“As far as this woman is concerned, this is hooliganism,” said Kremlin spokesperson Dmitry Peskov, who went on to laud the state channel as a pillar of objective and timely news.

“The channel and those who are supposed to will get to the bottom of this,” he told reporters.

Officials in Moscow describe Russia’s offensive in Ukraine as a special military operation to disarm the country and prevent “genocide” against Russian-speakers, a justification dismissed by Ukraine and the West as a false pretext for an invasion of a democratic country.

Almost 15,000 people have been detained across Russia during anti-war protests since Feb. 24, according to a tally kept by OVD-Info, an independent protest-monitoring group.

The protester on state TV was identified as Marina Ovsyannikova, a Channel One employee, according to OVD-Info and the head of the Agora human rights group.

State investigators were looking on Tuesday at whether she could be punished under a new law that carries jail terms of up to 15 years, Russia’s TASS news agency cited a law enforcement source as saying.

The legislation adopted eight days after the invasion of Ukraine makes public actions aimed at discrediting Russia’s army illegal and bans the spread of fake news or the “public dissemination of deliberately false information” about the use of Russia’s armed forces.

“We would urge the authorities to ensure that she does not face any reprisals for exercising her right to freedom of expression,” she told a news briefing in Geneva.

Shamdasani said it was not clear how many of the 15,000 people arrested in Russia in relation to anti-war protests remained in detention.

“We do not have access to those who are detained, unfortunately,” she said.