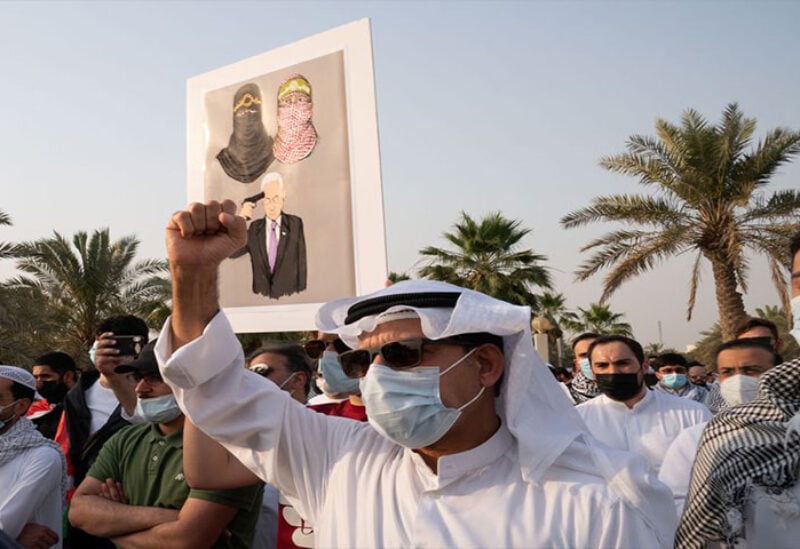 Kuwaitis demonstrated on Wednesday in support of Palestinians

Hundreds of Kuwaitis protested on Wednesday in support of Palestinians and burned an Israeli flag to protest at the bombardment of Gaza after authorities allowed the rally to proceed despite coronavirus restrictions.

Protesters, who were only granted access to a main square on foot to limit numbers, chanted “Death to Israel” and held banners rejecting normalization accords struck by the United Arab Emirates and Bahrain to forge ties with Israel.

“We send a message to our friends in GCC (Gulf Cooperation Council) countries that any normalization with the Zionists will not help. It helps the killer against the Palestinian people,” said 43-year-old Osama al-Zaid, a Kuwaiti political activist.

Israeli aerial bombardments of Gaza have killed 227 people in the 10-day conflict while rocket attacks by militant group Hamas have killed 12 people in Israel.

Hamas began firing rockets on May 10 in retaliation for what it said were Israeli rights abuses against Palestinians in Jerusalem and following Israeli police clashes with worshippers at Al-Aqsa Mosque.

“Palestine and Al-Aqsa are in our hearts. We absolutely refuse it (normalization),” said 30-year-old Kuwaiti employee Zahraa Habeeb.

Other protesters, who included dozens of expatriates, chanted slogans calling for rocket attacks on Tel Aviv.

In neighboring states such as the UAE, some citizens have criticized Hamas for provoking Israeli air strikes.

Protests are rare in the Gulf region, where governments keep a lid on dissent and political parties are not allowed. Qatar has also permitted a pro-Palestinian protest.

Gulf states have condemned what they called flagrant Israeli violations of Palestinian rights and called for a halt to hostilities.