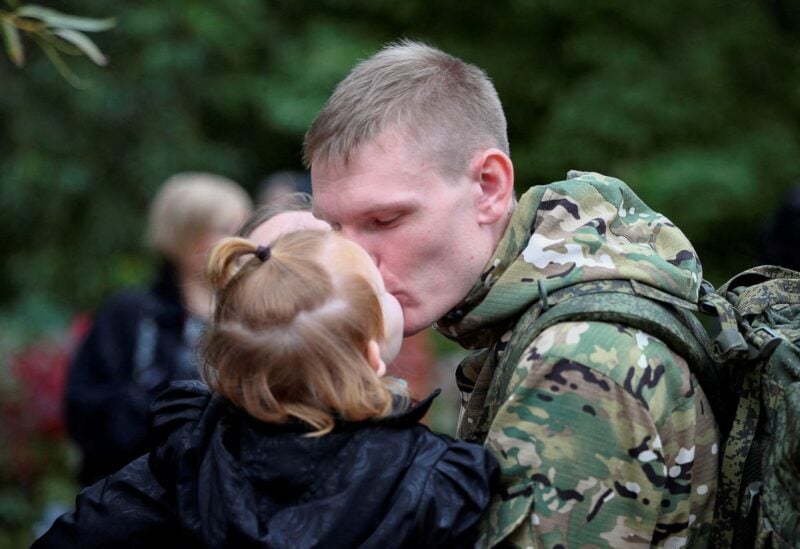 A Russian reservist bids farewell before his departure for a base in the course of partial mobilization of troops, aimed to support the country's military campaign in Ukraine, in the town of Volzhsky in the Volgograd region, Russia September 28, 2022. REUTERS/Stringer/File Photo

Russian lawyers claim they are working nonstop to provide advise to clients who might be drafted to fight in Ukraine after being inundated with panic-stricken requests for assistance.

Lawyers and civil society organizations report that since President Vladimir Putin said on September 21 that 300,000 people will be mobilized to reinforce Russia’s flagging war effort, they have been inundated with requests for assistance.

Hundreds of thousands have fled to countries such as Kazakhstan, Georgia and Finland. Many more remain in Russia and are hiding from military recruiters, praying they won’t be summoned or hoping for exemptions from service.

“We are working round the clock,” said Sergei Krivenko, who runs a group of around 10 lawyers called Citizen. Army. Law.

“People are being torn from their normal lives,” he said. “This is a mobilisation without time limit during a war. It could last months or years. People may not return … Leaving the army is pretty much impossible. The only way is death, injury or prison for disobeying orders.”

Implementation of the mobilisation has been chaotic. Though billed as enlisting those with military experience and required specialities, it has often appeared oblivious to individuals’ service record, health, student status or even age.

Putin last week acknowledged mistakes and said they must be corrected. “For example, I’m thinking of fathers of many children, or people suffering from chronic diseases, or those who are already past conscription age,” Putin said.

The governor of the far eastern region of Khabarovsk said on Monday that the military commissar there had been fired after half of the newly mobilised men were sent home because they did not meet the criteria to be called up.

On social media, tip sheets on how to avoid being mobilised circulate alongside forms for claiming medical exemptions or becoming a conscientious objector and instructions for filling them out.

Human rights lawyer Pavel Chikov said on Monday he and his team had delivered advisory webinars to 10,000 company employees. His followers on messaging app Telegram have more than tripled to 466,000 in the past two weeks.

Stories have spread like wildfire of men who should be exempt under the stated criteria but have been called up anyway.

“Those coming to us are panicked. They don’t understand what is happening,” said Krivenko. “They are calling up anyone. And the law allows them to recruit anyone.”

The second best option is to hide, he said. “Avoid signing a summons… avoid military offices. The legal punishment for not going is a small fine and I don’t know of anyone who has been fined yet.”

Kirill, a 26-year-old from southern Russia, said he could not leave behind his pets and so had gone underground, working for cash and not living at the address the military thinks is his.

“They can’t take me so easily,” he said.

Lawyer Alexei Tabalov said on Facebook that young people and women asked for help far more often than older men, and those older men who did speak up were often fatalistic and obedient to authorities.

“At the same time, we see crowds of men voluntarily going to military bases,” he said. “I want to scream – why did you go? Run, leave while you can! But no, they are quietly standing and waiting. What are they waiting for?”