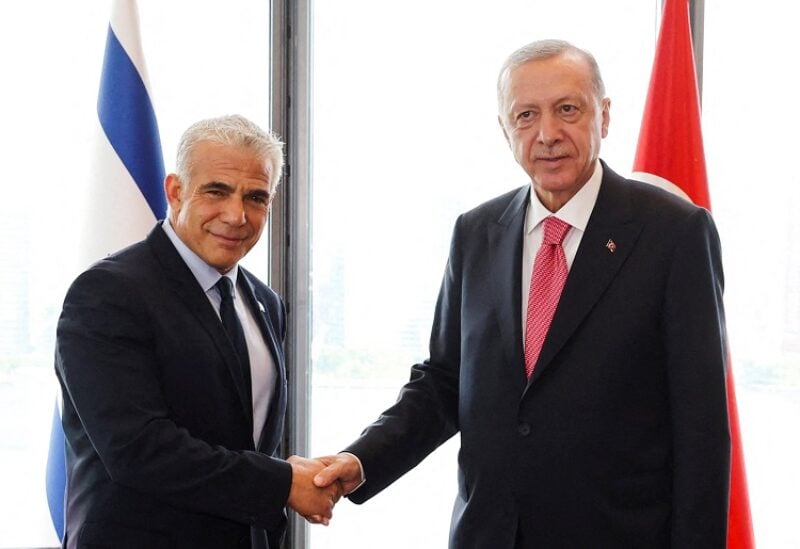 Turkish President Tayyip Erdogan meets with Israeli Prime Minister Yair Lapid on the sidelines of the U.N. General Assembly, in New York City, U.S., September 20, 2022. Presidential Press Office/Handout via REUTERS ATTENTION EDITORS - THIS PICTURE WAS PROVIDED BY A THIRD PARTY. NO RESALES. NO ARCHIVES. THIS PICTURE WAS PROCESSED BY REUTERS TO ENHANCE QUALITY. AN UNPROCESSED VERSION HAS BEEN PROVIDED SEPARATELY. TPX IMAGES OF THE DAY

For their first face-to- face talks over a decade, leaders of Israel and Turkey met on Tuesday.

The bilateral dialogue between Israeli Prime Minister Yair Lapid and Turkish President Recep Tayyip Erdogan took place on the sidelines of the UN General Assembly in New York City and came a month after the two nations announced the restoration of diplomatic relations following years of tensions.

Lapid highlighted Israel’s demand for the return of four of its citizens, including two soldiers, missing in the Gaza strip since a war in 2014, according to a statement from the Israeli prime minister’s office.

Lapid “brought up the issue of missing and captive Israelis and the importance of bringing them home,” the office said.

NATO member Turkey has maintained close relations with Hamas — the Islamist movement which is the de facto governing authority of the Gaza Strip.

Much of the West views Hamas as a terrorist group. This group is believed to be holding two Israeli civilians.

Israel-Turkey relations
While Turkey was the first Muslim-majority nation to recognize Israel in 1949, ties deteriorated under Erdogan, who last officially met an Israeli prime minister in 2008.

Relations hit a low in 2010 following the deaths of 10 civilians after an Israeli raid on the Turkish Mavi Marmara ship.

The vessel was part of a flotilla attempting to breach a blockade by carrying aid into the Gaza Strip.

However, the frosty ties have thawed in the last few months and energy has become a key area of cooperation.

The two nations are also expected to exchange new envoys soon.
In his UN General Assembly speech, Erdogan reiterated calls for the establishment of a Palestinian state with East Jerusalem as its capital.

But the Turkish President added that his country was “determined to continue to develop our relations with Israel for the sake of the future, peace and stability of not only the region, but also of Israel, the Palestinian people and ours.”