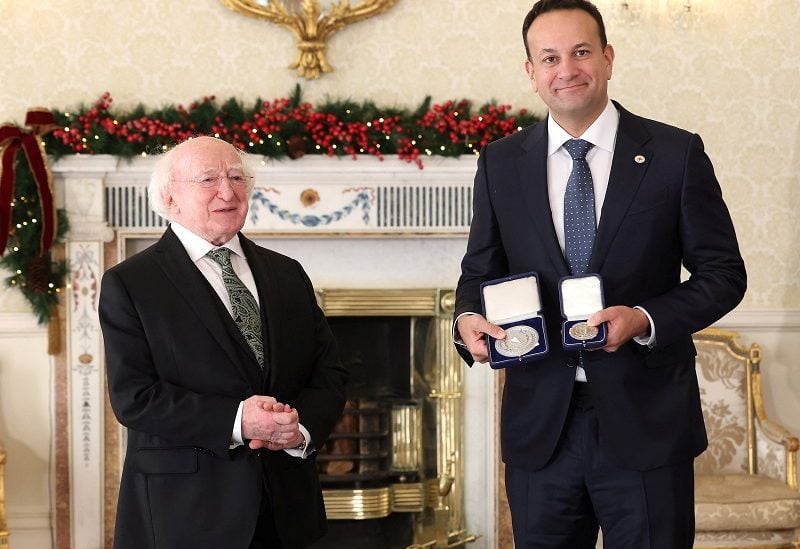 The President of Ireland Michael D.Higgins presents Leo Varadkar the seal of office after he becomes the Republic of Ireland's new Prime Minister (Taoiseach) in Dublin, Ireland December 17, 2022. REUTERS/Damien Eagers

Replacing Micheal Martin as part of a coalition deal, Leo Varadkar was elected for a second term as Ireland’s prime minister, or taoiseach, on Saturday.

Varadkar’s Fine Gael party, Martin’s Fianna Fail, and the Green Party formed a coalition government in 2020, a historic first for forces that were on opposing sides during Ireland’s civil war a century ago.

His second tenure is expected to be more testing, particularly due to festering Brexit-related disagreements over the Northern Ireland Protocol.

“I want to work with all parties in this house and in Northern Ireland, as well as with the British government and our partners in the EU, to make progress on the protocol and restore the institutions of the agreement,” he told lawmakers in the Dail, the lower house of Ireland’s parliament.

Varadkar said his aim will be to provide “new hope and new opportunities” and ensure “housing, economic opportunity, and a fair start for all.”

Acknowledging the challenges ahead, he said: “Ireland has never been a failed state … and it is grotesque and dishonest to claim that we are or we were. But we are failing some of our citizens, and it is essential to our success as a country that we put this right.”

He also reiterated that Ireland stands with its fellow Europeans in this “harsh winter.”