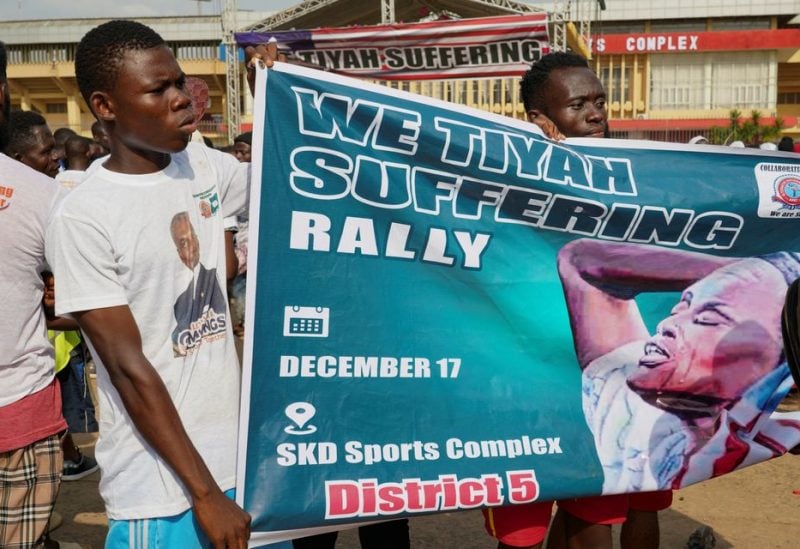 Demostrators hold a banner as they protest over the ongoing economic hardship and President George Weah's prolonged absence from the country. Reuters/Carielle Doe

More than a thousand people participated in a protest against economic woes and President George Weah’s protracted absence from the nation in a suburb of Monrovia, Liberia.

Large-scale protests have occasionally occurred during Weah’s five years in office, but frustration with his administration’s handling of the economy has increased as Liberians deal with rising food and fuel prices connected to the Ukraine war and the COVID-19 pandemic’s aftermath.

Saturday’s rally in Monrovia’s Paynesville district was organized by a coalition of Liberia’s four largest opposition parties, but internal disputes led all but one, the Alternative National Congress (ANC), to pull out at the last minute.

Many of the protesters wore shirts printed with the face of Alexander Cummings, who is challenging Weah for the presidency under the ANC flag ahead of a 2023 election. Some held banners reading “We are tired of suffering”.

“(The government) is unable to create jobs, yet the president abandoned his people,” said Prince Barclay, an electrical engineer who said he was concerned about his children’s future prospects.

Weah has been out of the country since the end of October, during which time he visited Qatar to watch his son, Timothy Weah, play for the U.S. team in the World Cup and attended a U.S.-Africa Leaders Summit in Washington. He is expected back on Monday.

“We expected a lot from this government but they have failed us,” Barclay added.

Lewis Brown, a prominent Liberian politician who served in the cabinets of former presidents Ellen Johnson Sirleaf and Charles Taylor, was the event’s main organiser.

“Too many people in this country are suffering, cannot pay rent, cannot pay school fees,” Brown said as she addressed the crowd. “People are tired.”