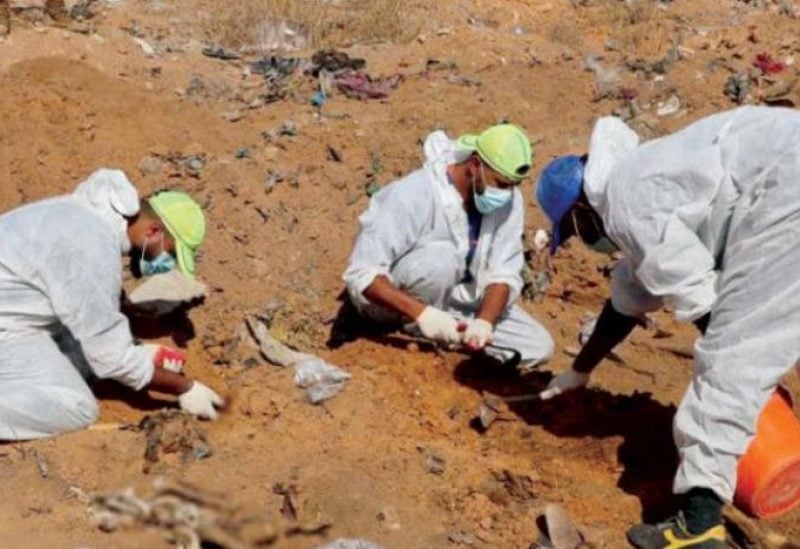 The Tarhuna Victims Association said on Sunday it has identified 12 bodies recovered last month from mass graves in the western Libyan town of Tarhuna, where scores of corpses have been discovered in recent years.

The 12 corpses include six from Tarhuna, two from each of Qasr Bin Ghashir and Tripoli, one from each of Souq al-Khamis and Bani Walid, it announced.

Residents of the city accuse the Kani militia of committing these crimes over two years ago. The discovery of the mass graves drew widespread local and international condemnation and demands for accountability.

Soon after the war waged by the Libyan National Army on Tripoli ended in June 2020, residents in Tarhuna discovered mass graves with hundreds of bodies. The victims were of all ages and showed signs of torture.

The Victims Association said one of the identified bodies was that of Faraj Al-Sharif Masoud Al-Tarhuni, born in 1989, and who worked for a catering company at Tripoli airport.

Tarhouni is from Qasr Bin Ghashir. He was kidnapped from his home by the Kani militia in June 2019. His corpse was found in one of the mass graves in mid-October 2021.

The Association also identified the body of Tarhuna native Abd al-Hakim Moftah Saad Doma. Born in 1976, he worked in the education sector.

He was kidnapped by the Kani militia in August 2019 and his corpse was found in a mass grave on October 4, 2021.

He met with families of the victims, saying he had never seen such crimes before in the entire world.

The Libyan prosecution is still investigating the crimes, while the Kani militia has been accused of killing hundreds of prisoners in retaliation to the killing of its leader Mohsen al-Kani.

The Kani militia was comprised of six brothers and their loyalists. They at one point controlled Tarhuna, terrorizing the people and cracking down on dissenting voices..