‘Listen to people on this side,’ migrants in Mexico say as Biden visits border 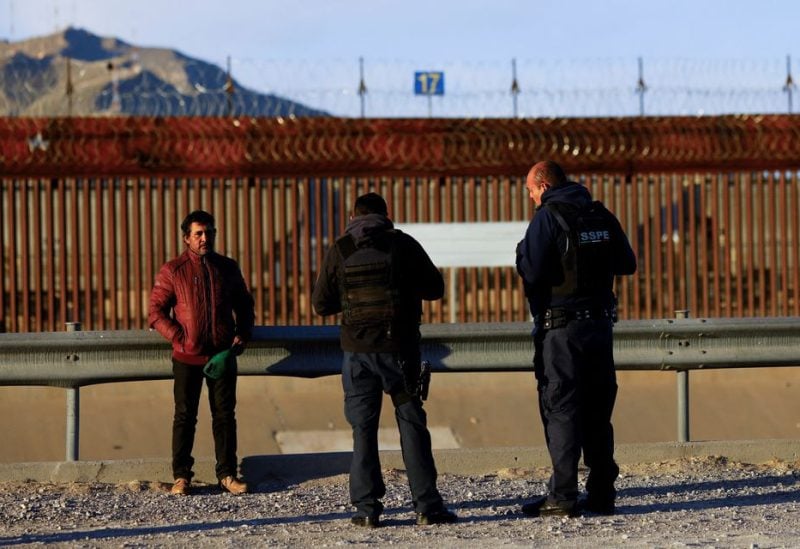 Mexican police officers question Erlan Garay, a migrant from Honduras trying to reach the United States, near the border between the United States and Mexico, in Ciudad Juarez, Mexico January 7, 2023 - REUTERS

Julio Marquez, a Venezuelan immigrant, is selling lollipops close to the border in Ciudad Juarez, in northern Mexico. He is holding a cardboard sign that reads, “Help us with whatever comes from your heart.”

The same message applies to U.S. Vice President Joe Biden, who will be in the nearby Texas city of El Paso on Sunday.

The 32-year-old Marquez said, “We hope he helps us, that he lets us through, since we’re suffering a lot here in Mexico.” He needs to pay attention to those on this side.

The two-pronged approach offers legal pathways to the United States for certain Cubans, Nicaraguans, Haitians and Venezuelans who have U.S. sponsors, while expelling people of those nationalities back to Mexico if they attempt to cross the border without permission.

Mexican migration agents and state police on Saturday patrolled the concrete banks of the Rio Grande river dividing Ciudad Juarez and El Paso, as groups of families attempted to clamber through loops of concertina wire into the United States.

“Duck down,” Erlan Garay of Honduras instructed a Colombian woman and her three children, including an 8-year-old boy clutching a Spiderman toy.

“They’re going to request asylum, they have a chance,” he said, adding that he would look for somewhere else to clandestinely cross, and shrugging off a drop of blood where the fence pricked his hand.

Marquez said he and his partner, Yalimar Chirinos, 19, do not qualify for the new legal entry program because they lack a U.S. sponsor.

“They’re constantly changing the laws, every week,” Chirinos said, wearing a black hoodie and a single pink-and-blue glove to try to ward off the cold.

The couple has spent five months in Mexico after crossing several countries and the dangerous Darien jungle between Colombia and Panama. They sleep at night on the street without a tent or blankets, hugging one another to stay warm, wary of criminals known to rob and kidnap migrants.

At one point they crossed undetected into Texas, but after several days without food or a place to stay, they turned themselves in to U.S. officials, who sent them back to Mexico.

Marquez said he will stick it out another 15 days hoping to find a legal route into the United States, before looking for a way back to Venezuela.

“I don’t want to be here anymore,” he said, breaking into tears. “Mr. President, if you’re going to deport me, deport me back to my country, not back here to Mexico.”

Others were undeterred, even after their own expulsions to Mexico.

“Send me wherever you want, I’ll come back,” said Jonathan Tovar, 29, speaking on Friday from behind the fence of Mexico’s migration office in Ciudad Juarez. “I want the president of the United States to give me and my family a chance.”