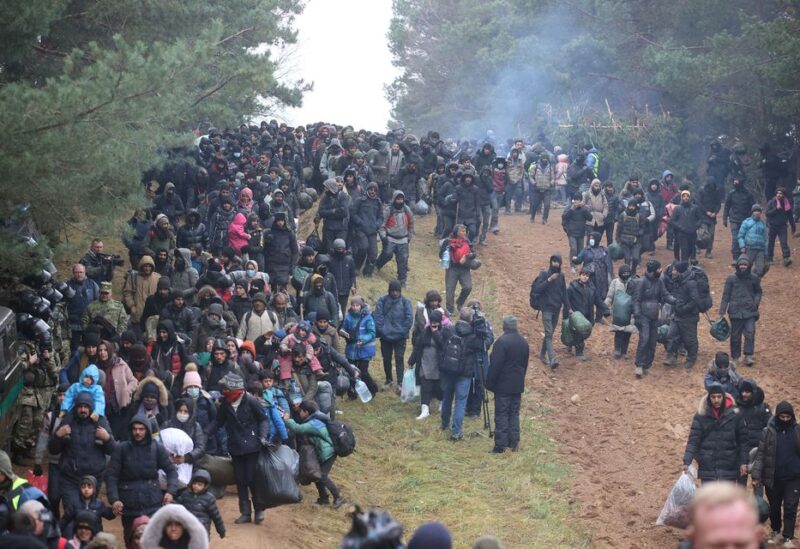 Paulina Bownik says police removed her from a hospital in the Polish city of Bialystok last month when she tried to give a sick migrant papers to sign so he could seek asylum.

She had heard the migrant would soon be taken back to the border with Belarus and wanted to help him begin the asylum process. But police intervened and she says she now faces a court hearing for allegedly disturbing the peace.

“From my understanding, helping is legal but they are trying to intimidate us,” Bownik, 37, a doctor who has been providing support to migrants at the border, told Reuters.

Police in Bialystok did not immediately respond to a Reuters request for comment about her case.

She’s one of over half a dozen locals, doctors and activists in the Poland-Belarus border region who said they felt authorities and hostile groups intimidated people helping migrants, threatening them with legal repercussions or violence.

Tens of thousands of migrants from Middle Eastern countries have tried to cross into Poland from Belarus to reach the European Union. Thousands have made it in recent months.

The EU says Belarus is waging hybrid warfare, sending migrants to the border in retaliation for sanctions against President Alexander Lukashenko’s rule.

Polish charities say the situation on the border has created a humanitarian crisis as temperatures drop, and local groups say they face reprisals from the community and from authorities for helping the migrants.

Border Aid (Medycy na Granicy), which includes medics and doctors volunteering to treat sick migrants near the border, said their ambulance’s tyres were deflated earlier this month and the windows of four of their cars were smashed recently.

“If at any point there was a situation in which someone was threatened for providing help, that’s unacceptable,” Jakub Sieczko, one of the medics running the operation, told a news conference.

They have suspended their activities on the advice of a security specialist, handing over to the Polish Centre for International Aid, an NGO.

Many people living near the border said they had faced the threat of being charged as smugglers for providing food and shelter to migrants – activities which lawyers said are not illegal.

One woman said she was threatened by a police officer with smuggling charges after she told him that she would allow migrants to sit in her car and would drive them to a doctor if temperatures continue to drop.

“I told him that I’m ready to go to court so that the court can prove that I’m smuggling people instead of helping those whose health and life are at risk,” she told Reuters, asking to remain anonymous.

A spokesperson for the regional police said warming a migrant in one’s car is not smuggling.

Another activist living near the state of emergency zone – a 3km-wide strip of land along the border which is off-limits to journalists, charities and non-residents – said she was fined 300 zlotys ($75) by the border guard for driving soup and clothes to a group of migrants in the zone.

While it is illegal for people who don’t live in the border zone to enter it, many locals living nearby told Reuters that they have been allowed to enter to work or visit family.

The activist said she drives into the zone regularly and had never been fined until she was seen helping migrants.

A regional police spokesperson told Reuters that they were not responsible for handing out such fines and the border guard handled such situations in the state of emergency zone.

A border guard spokesperson said locals need to get permission to enter the zone and that will only be granted for the purpose of meeting someone who lives there permanently.

The interior ministry referred queries to the police and border guard.

Some residents of border towns said they understood the police and border guard were just doing their jobs.

Kamil Syller, a lawyer and resident of Werstok, has however started displaying a green light at his house to show migrants that help is available.

“It’s so we are all united, so we’re not afraid and we show each other that there’s room to help,” he said.