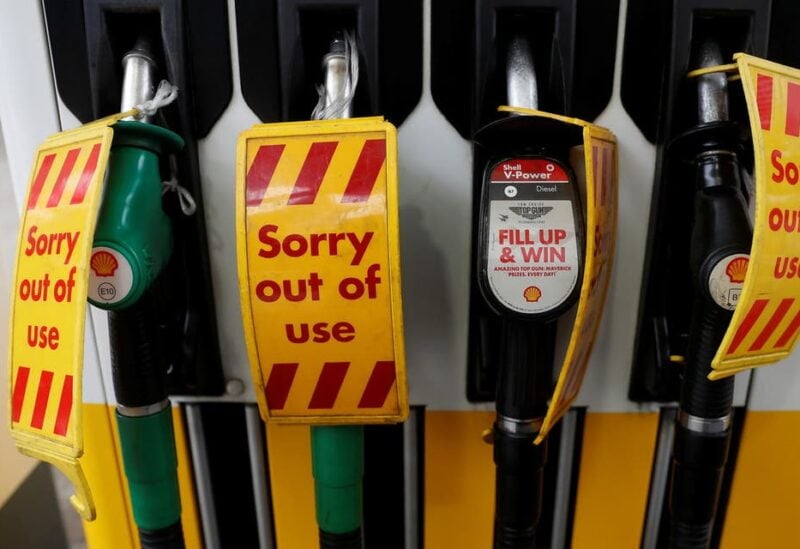 Out of use signs are seen on fuel pumps at a filling station that has run out of fuel, in London, Britain, September 25, 2021. (Reuters)

Drivers in London waited in long queues for fuel and jammed up filling stations with empty pumps on Saturday (September 25) as Britain was expected to announce plans to issue temporary work visas to truck drivers.

The measure would ease an acute labor shortage that has led to fuel rationing throughout the UK.

“Panic. Pure panic,” said taxi driver David Turner. “The radio, television, the media. Seems to suggest there’s not a shortage, but really there isn’t any,” he added.

As retailers warned of significant disruption in the run-up to Christmas, Prime Minister Boris Johnson’s office said it was looking at temporary measures to address the shortage of heavy goods vehicle (HGV) drivers.

Newspapers reported that the government would allow up to 5,000 foreign drivers into Britain on short-term visas, a measure that logistics companies and retailers have demanded for months but which the government had previously ruled out.

Shortages of truckers have been caused partly by Brexit and COVID-19, which put a stop to driver training and testing for about a year.

“We’re looking at temporary measures to avoid any immediate problems, but any measures we introduce will be very strictly time limited,” a spokeswoman for Johnson’s Downing Street office said in a statement.

Ministers have cautioned against panic buying, and oil companies say there is no shortage of supplies, merely problems delivering the fuel to gas stations.

However, there were long lines of vehicles at filling stations as motorists rushed out to fill up, and some forecourts closed as their supplies ran out.