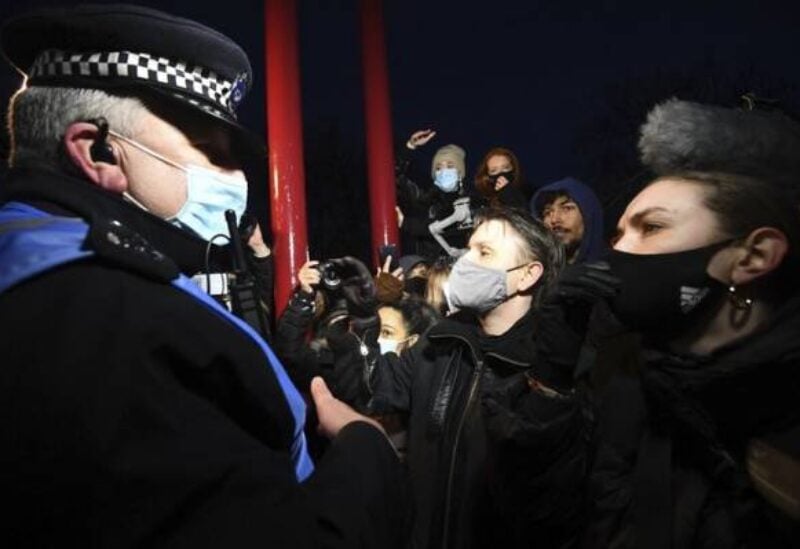 Police in London clashed with mourners and protesters on Saturday after more than a thousand people gathered to mark the killing of a 33-year-old woman, hours after the police officer charged with her murder appeared in court.

Sarah Everard’s disappearance as she walked home on the evening of March 3 had led to a wave of accounts from women about the dangers of walking streets alone at night, and dismay at the failure of police and wider society to tackle this.

Early on Saturday an impromptu memorial with flowers and candles sprang up around the bandstand on Clapham Common in southwest London, near where Everard was last seen alive.

Kate, Britain’s Duchess of Cambridge, was among those who paid their respects. A palace official said Kate “remembers what it was like to walk around London at night before she was married”.

By late Saturday around a thousand people – mostly women – gathered at the site to pay their respects and protest at the lack of security they felt when out alone. Some chanted “shame on you” at police who were present.

Campaign groups had wanted to organize a formal vigil, but London’s Metropolitan Police said people should not gather due to coronavirus restrictions. The head of the force, Cressida Dick, said any vigil “would be unlawful and would be unsafe”.

“We absolutely did not want to be in a position where enforcement action was necessary,” Ball said in a statement. “But we were placed in this position because of the overriding need to protect people’s safety.”

London Mayor Sadiq Khan – who is responsible for policing in the city – said the officers’ response “was at times neither appropriate or proportionate” and added that he was seeking an urgent explanation from Dick.

Earlier on Saturday, Prime Minister Boris Johnson said he and his partner Carrie Symonds would light a candle in memory of Everard.

“I will do everything I can to make sure the streets are safe and ensure women and girls do not face harassment or abuse,” he said.

Couzens’s lawyer did not enter a plea to the charges of kidnap and murder ahead of a fuller court hearing scheduled for Tuesday. Couzens remains in custody.

Police discovered Everard’s body on Wednesday in woodland about 50 miles (80 km) southeast of London. The court heard that her body was found in a builder’s refuse bag, and was identified using dental records.

Couzens joined the Metropolitan Police in 2018 and guarded foreign embassies before his arrest.

England’s police watchdog has launched an investigation into the Metropolitan Police’s handling of the case.