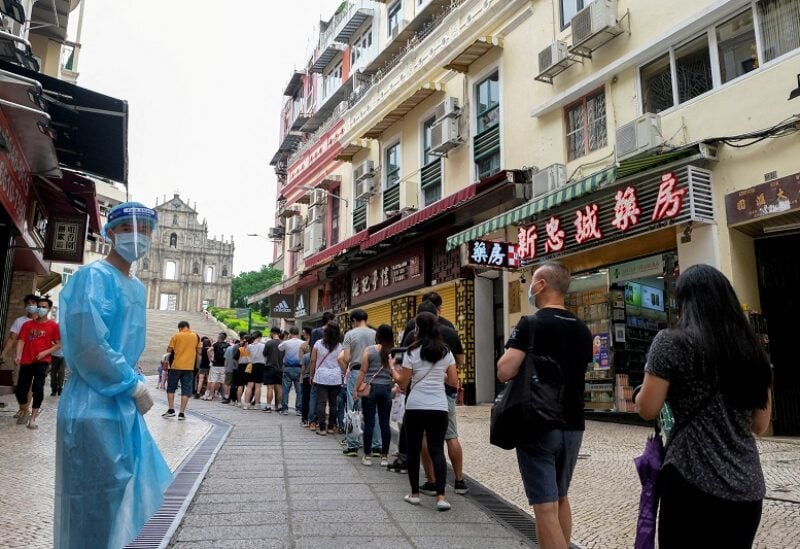 As of Friday, two hotels in Macau will be used COVID-19 medical facilities, in an attempt to increase capacity to handle a surge of infections in the world’s biggest gambling hub.

The east wing of Grand Lisboa Palace owned by SJM Holdings and the Grand Hyatt hotel owned by Melco Resorts will together provide close to 800 rooms, they said.

The announcement comes as Macau reported 88 new cases on Friday, taking the total to 1,303 cases since mid-June. More than 17,000 people are in quarantine, according to authorities.

Authorities have locked down 22 residential buildings across Macau as they carry out a sixth round of city-wide mass testing for all residents.

Sealed buildings include the landmark Grand Lisboa hotel on Macau’s bustling main peninsula. More than 500 people were locked inside the hotel for at least five days from Tuesday after infected cases were found there.

The former Portuguese colony only has one public hospital for its more than 600,000 residents, and its medical system was already stretched prior to the coronavirus outbreak.

Authorities have set up a makeshift hospital in a sports dome near the city’s Las Vegas style Cotai strip and have around 600 medical workers from the mainland assisting them.

More than 90% of Macau’s residents are fully vaccinated against COVID-19 but this is the first time the city is grappling with the fast-spreading Omicron coronavirus variant.

Macau adheres to China’s “zero-COVID” policy that aims to curb all outbreaks at almost any price, running counter to a global trend of trying to co-exist with the virus.

While the government has not imposed the type of citywide lockdown seen in mainland Chinese cities, Macau is effectively closed with most facilities shut. Residents have been asked to stay home, public transport is curtailed and restaurants are only providing takeaway.

Residents thronged to food markets and grocery stores on Thursday, spooked that the city would be fully locked down. The government denied the rumours and urged the public not to panic and hoard food, according to local broadcaster TDM.

Frustration is mounting amongst residents at the government’s handling of the outbreak. Some residents have had to queue for more than 20 hours to access healthcare facilities, and many are desperate to go back to work again.

“There is so much anger in the community,” said one casino executive who declined to be named due to company policy.

Casinos are allowed to stay open to protect jobs, but executives said it didn’t make sense to have staff on hand despite the lack of business.

The gaming industry accounts for more than 80% of government revenue with most people employed directly or indirectly by the casino resorts.