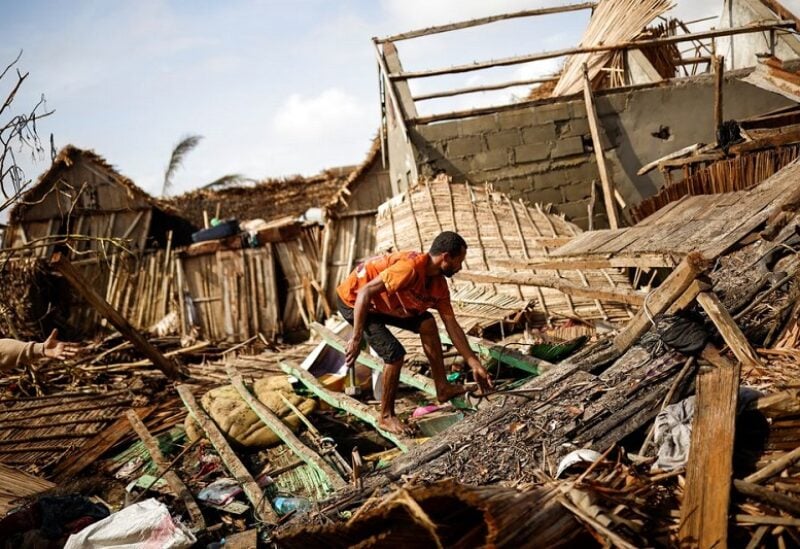 A man works on the destroyed house of Philibert Jean Claude Razananoro, in the aftermath of Cyclone Batsirai, in the town of Mananjary, Madagascar, February 8, 2022. REUTERS/Alkis Konstantinidis

The death toll in Madagascar from Cyclone Batsirai rose to 92, the state disaster relief agency said on Wednesday, as information continued to filter in from areas of the country that were badly affected.

The cyclone slammed into the Indian Ocean island late on Saturday, knocking down houses and electricity lines as it battered the southeastern coast. The storm moved away late on Sunday, leaving 91,000 people with destroyed or damaged homes.

The disaster relief agency had earlier on Wednesday raised the toll from 29 to 80, and said that 60 of the deaths had occurred in a single area, the Ikongo district in southeast Madagascar. It said it was still collecting details about what had happened in Ikongo.

A member of parliament representing the district had previously said the death toll was high there, and that most victims had drowned or been crushed when their houses collapsed.

The disaster relief agency said humanitarian relief workers had arrived from France and Germany to help with the response.

Batsirai was Madagascar’s second destructive storm in two weeks, after Cyclone Ana killed 55 people and displaced 130,000 in a different area of the country, further north.

The island nation, which has a population of nearly 30 million, was already struggling with food shortages in the south, a consequence of a severe and prolonged drought.

The World Food Programme said Batsirai had made the situation worse by destroying crops of rice, fruits and vegetables that were just two weeks away from harvest.

The cyclone caused widespread flooding and made 12 roads and 14 bridges impassable, cutting off some of the worst affected areas and impeding efforts to bring relief to local communities.