Madrid’s free COVID tests struggle to keep up with demand 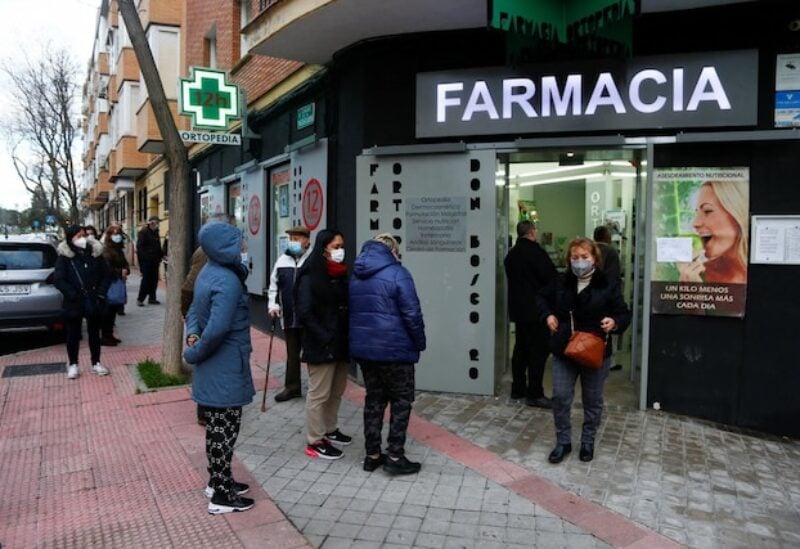 Demand for free COVID-19 testing kits provided by Madrid’s regional government far outstripped supply on Tuesday, with long queues forming outside pharmacies in what has become a common scene since the Omicron variant began driving up infection.

It was a similar story in Italy, where long lines have developed at some drive-in testing centres while many chemists have reported being deluged with requests for tests as infections climb.

Madrid-based pharmacist Cristina Sanchez said she had only received 20 test kits to distribute on Tuesday as part of a plan to reinforce supply after pharmacies started running out of paid tests, but there were already more than 30 people waiting ouside when she opened.

As the first few people in line tend to take several tests each, most have to return home empty handed or buy kits for 9 euros, which were also selling out fast.

“The people who are waiting outside, who are cold, who have been waiting for a long time, we can’t give them to them anymore,” she told Reuters at her pharmacy on the outskirts of Madrid.

Taxi driver Miguel Jesus Arroyo was one of the lucky few to secure a test.

“You’ve got to get up early, because if you don’t come soon, it’s all over in a flash,” he said.

Fuelled by the highly contagious Omicron variant, cases in Spain have soared in the past month, pushing the national 14-day incidence to a record 1,206 cases per 100,000 people on Monday, a five-fold rise since the beginning of December.

Italy, one of the countries worst hit by the pandemic, has also reported rising infections.

Luca Zaia, the head of the north-eastern Veneto region which has been badly hit by the surging case load, said he was worried test kits could soon run out and asked the government to drop testing requirements in certain situations.

“We cannot let the testing system collapse,” he said.