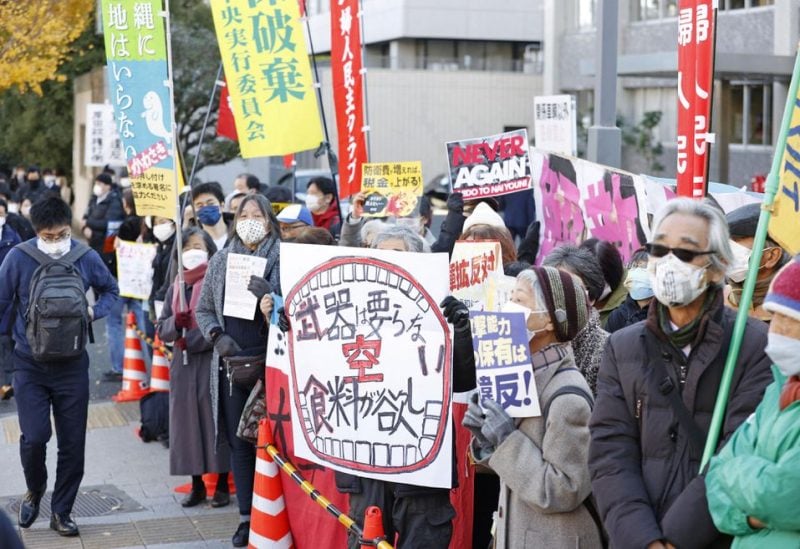 People protest against a tax hike plan for higher defense spending in front of the prime minister's office in Tokyo, Japan December 16, 2022, in this photo by taken by Kyodo via REUTERS/File Photo

The majority of Japanese citizens oppose tax increases to fund military expansion, according to a survey done by Kyodo after the government announced Japan’s largest military build-up since World War Two.

Japan on Friday unveiled a $320 billion military expenditure plan to acquire missiles that can reach China and prepare the nation for any protracted fight, as fears of war are stoked by North Korea’s missile launches, China’s claim to Taiwan, and Russia’s invasion of Ukraine.

Prime Minister Fumio Kishida this month said his government would not hike taxes for the next fiscal year beginning April 1 but would raise them in stages toward fiscal 2027 to secure funding to boost the defence budget.

He said Japan was at a “turning point in history” and that military expansion through cost-cutting and tax hikes was “my answer to the various security challenges that we face”.

Almost 65% of respondents in Kyodo’s survey opposed raising taxes for military spending, while 87% said Kishida’s explanation of the need to raise tax was insufficient.

The survey also showed support for Kishida’s administration was unchanged from a month earlier at 33.1%, the worst since it was launched in October last year.

The government’s five-year tax plan, once unthinkable in pacifist Japan, would make the country the world’s third-biggest military spender after the United States and China, based on current budgets.