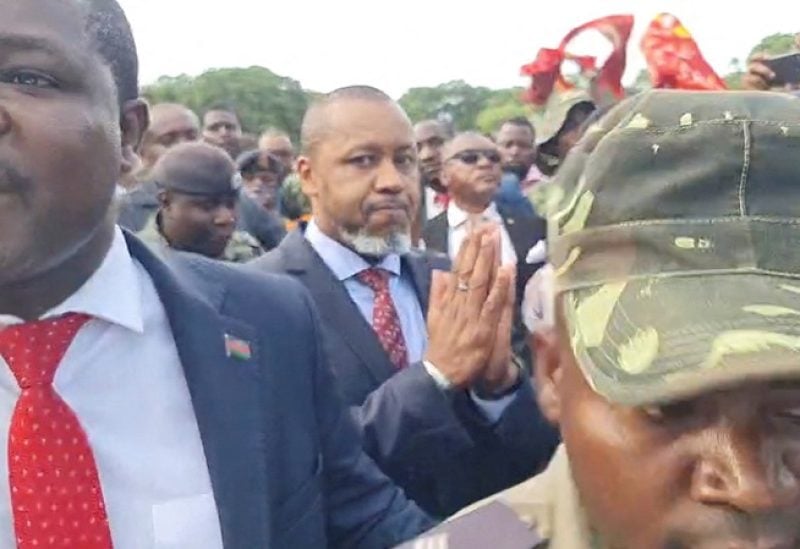 Malawi's Vice President Saulos Klaus Chilima gestures after being granted bail, according to media, in Lilongwe, Malawi November 25, 2022 in this screen grab from social media video obtained by Reuters. /via REUTERS THIS IMAGE HAS BEEN SUPPLIED BY A THIRD PARTY. NO RESALES. NO ARCHIVES.

After months of investigation, Malawi’s Anti-Corruption Bureau (ACB) arrested the country’s Vice President Saulos Klaus Chilima over corruption allegations, on Friday, said the agency. This comes months after Malawi’s President Lazarus Chakwera stripped the VP of his power after he was first accused of corruption by the watchdog.
According to the ACB, Chilima is accused of accepting at least $280,000 and “other items” from a British businessman, Zuneth Sattar between March 2021 and October 2021 in exchange for awarding contracts by the Malawi government. The VP allegedly helped two companies, Xaviar Limited and Malachitte FZE, which are connected to Sattar.
Furthermore, Chilima will be taken to court where he is expected to face at least six charges out of which three are on counts of corrupt practices by a public officer, among others, said the ACB. Since then, he has reportedly pleaded not guilty in court to the corruption charges. “I have no comment to make. We will let the court process run its course,” said the VP to the press outside the court after being granted bail, said Reuters citing local media reports.
The report also said that his backers and the local police seemingly clashed when he was being taken to the court. Notably, previous attempts to question Chilima have been hindered by his followers who call the allegations against him a political witch hunt. This comes after Malawi’s president Chakwera dissolved his entire cabinet, earlier this year, following allegations of corruption against three serving ministers.
Meanwhile, the watchdog has been investigating the connection between the British businessman and public officials in Malawi for months over the alleged plundering of state resources by influencing the awarding of contracts through the country’s public procurement system, said the ACB.
Meanwhile, a Financial Times report said Sattar is under investigation by the United Kingdom’s National Crime Agency (NCA) for his alleged abuse of Malawi’s public procurement system. However, he has not been charged and has denied any wrongdoing since, said the report. The Malawi-born British businessman was also detained in the UK last year but is reportedly out on bail.
Earlier this year, in June, Chakwera also stripped the VP of all his powers after he was first accused of corruption. However, it did not stand since Malawi’s constitution does not allow the president to suspend or remove the vice president because he is an elected official but has barred Chilima from carrying out his duties. The president and vice president came into power following a coalition between their parties and subsequent victory in the elections held two years ago.