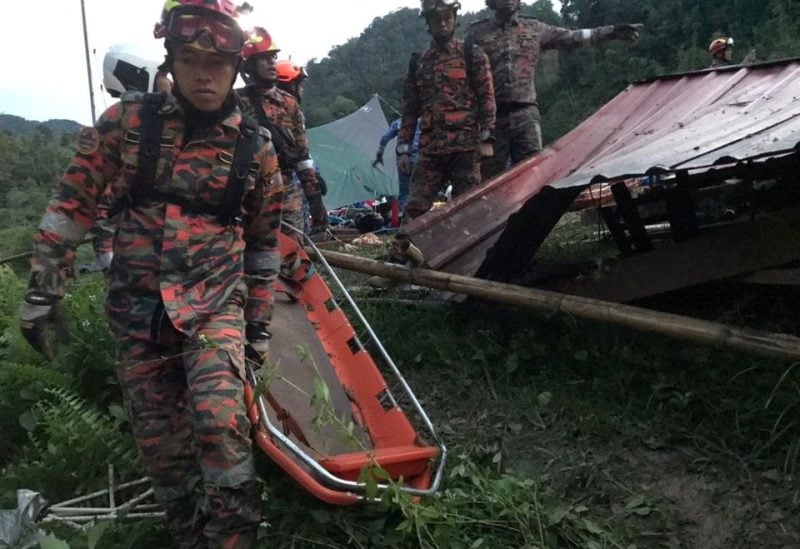 Rescuers work during a rescue and evacuation operation following a landslide at a campsite in Batang Kali, Selangor state, on the outskirts of Kuala Lumpur, Malaysia, December 16, 2022, in this picture obtained from social media. Korporat JBPM/via REUTERS

Authorities in Malaysia said that a landslide on Friday killed at least 21 people, including children, as they slept in their tents at an unauthorized campsite. Search teams were looking for survivors among the deep mud and felled trees.

The landslide in Selangor state, which borders Kuala Lumpur, happened before 3 a.m. (1900 GMT), destroying a hillside onto an organic farm that authorities claimed was running the campsite illegally.

Among the victims were five children and 12 women, according to the fire and rescue department.

The disaster struck about 50 km (30 miles) north of Kuala Lumpur in Batang Kali, just outside the popular hilltop area of Genting Highlands, known for its resorts, waterfalls and natural beauty.

The earth fell from an estimated height of 30 metres (100 ft) and covered an area of about an acre (0.4 hectares), according to the fire and rescue department’s state director.

The farm owners did not immediately respond to a request for comment. Two of its workers, who are Myanmar nationals, told Reuters they managed to escape with others after being roused by neighbours, just minutes before the farmhouse was destroyed.

“I have never seen such a horrible incident. I feel so shocked and terrified,” said 35-year-old Thawng Uk.

“We could bring nothing at all as we urgently ran … We are asking around where to get shelter and food.”

His colleague Kung Tuang, 31, said he was afraid they would lose their jobs now that the farm had been destroyed.

An initial investigation showed an embankment of about 450,000 cubic metres of earth had collapsed, according to minister of natural resources, environment and climate change, Nik Nazmi Nik Ahmad.

There were 94 people caught in the landslide but 61 were safe, with 12 missing, according to the Malaysia National Disaster Management Agency.

Seven people were injured, including a pregnant woman, while others had wounds ranging from minor cuts to a suspected spinal injury, health minister Zaliha Mustafa said.

Close to 400 personnel were involved in the rescue mission, police said.

Three Singaporeans were among those rescued, the Singapore government said in a statement.

Pictures posted on the Father’s Organic Farm Facebook page show a farmhouse in a small valley, with a large area where tents can be set up.

Its owners were allowed to operate organic farms, but had not applied for licences to run three campsites on the property, Local Government Development Minister Nga Kor Ming told reporters.

If found guilty of violating the law, the owners can be jailed up to three years or fined up to 50,000 ringgit ($11,300), Nga said, adding he had ordered campsites near rivers, hillsides and other high-risk areas nationwide to close for seven days.

Local television footage showed the aftermath of a large landslide through a steep, forested area beside a road, while images on social media showed rescue workers clambering over thick mud, large trees and other debris.

“I pray that the missing victims can be found safely soon,” minister Nik Nazmi tweeted.

Selangor is the country’s most affluent state and has suffered landslides before, often attributed to forest and land clearance.

Landslides are common in Malaysia, but typically only after heavy rains. Flooding occurs often, with about 21,000 people displaced last year by torrential rain in seven states.

Leong Jim Meng, a camper, said he had not expected a landslide as there had been only light drizzle in recent days.

“My family and I were trapped when the soil covered our tent,” he told Malay-language daily Berita Harian. “We managed to run to the parking lot and called the authorities. They arrived quite quickly, about 30 minutes later.”