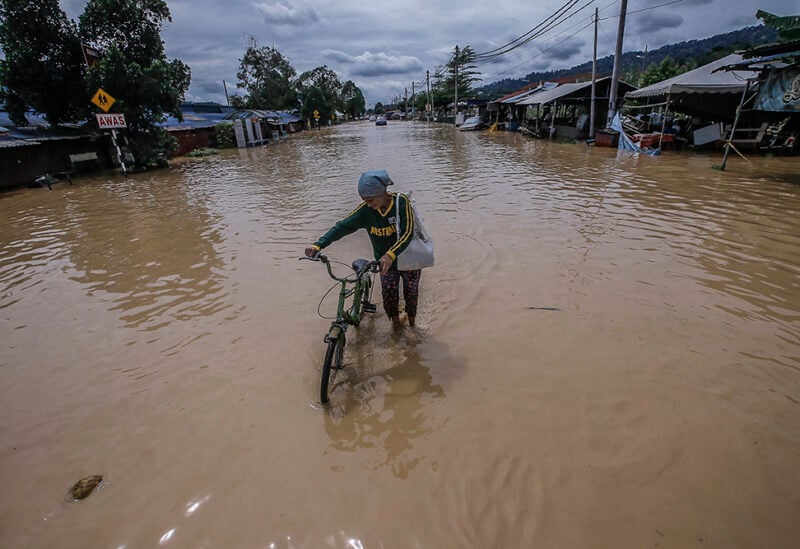 Several flood victims were seen wading through the floods in Hulu Langat, Prolonged heavy rains caused most areas and districts in the Klang Valley to be hit by flash floods but it seems that the water is receding and recovering in some areas December 19, 2021. — Picture by Hari Anggara

The environment ministry said last week that Malaysia is requesting $3 million from the United Nations Green Climate Fund (GCF) to build a national strategy to adapt to climate change, amid devastating floods that have affected almost 70,000 people this month.

The monies asked are insignificant in comparison to the amount of money the government has vowed to spend on flood prevention, but experts estimate that the plan’s execution would cost far more.

Since December 18, heavy rain has caused severe floods in eight Malaysian states, killing at least 48 people, prompting calls for the government to enhance its readiness for extreme weather occurrences.

In response to questions sent to the Environment and Water Ministry on Dec. 20 on Malaysia’s approach to climate adaptation, Secretary-General Zaini Ujang replied that the ministry will request the GCF funds to help develop a National Adaptation Plan by the end of next year.

The plan will focus on areas such as water, agricultural, and food security, public health, forestry, and infrastructure, Zaini said in a written response.

“The ministry also has long-term plans to request for climate funds that can assist in implementing programs addressing the impact of climate change,” he said.

Zaini did not give specific details on the adaptation plan, or how much the government would need to implement it.

The GCF funds are the first time the Malaysian government has sought any money for climate adaptation, which are policies that a country puts in place to deal with climate change effects.

The funds pale in comparison to the 9.8 billion ringgit ($2.33 billion) for flood mitigation projects such as building water barriers, catchment areas, and deepening rivers that Zaini said Malaysia has set aside already.

“Adaptation will take much more funds compared to mitigation because we need to overhaul our urban planning, all these costly infrastructure projects,” said Ili Nadiah Dzulfakar, a co-founder of climate activist group Klima Action Malaysia.

A draft adaptation plan should examine the interaction of flooding or droughts on food security and crop yields and the need for energy efficient healthcare services with strong communication systems, she said.

In 2018, Yeo Bee Yin, Malaysia’s then-environment minister, proposed a so-called Climate Change Act along with an adaptation strategy but a formal plan was never submitted to the parliament and progress faltered amid political turmoil in 2020.

Malaysia typically has flooding on its eastern coasts that are exposed to the northeast monsoon between October and March.

But authorities were caught off-guard by unusually heavy rainfall and flooding this month in highly-populated urban areas in its western and central regions, which some experts say were worsened by poor drainage and overdevelopment.