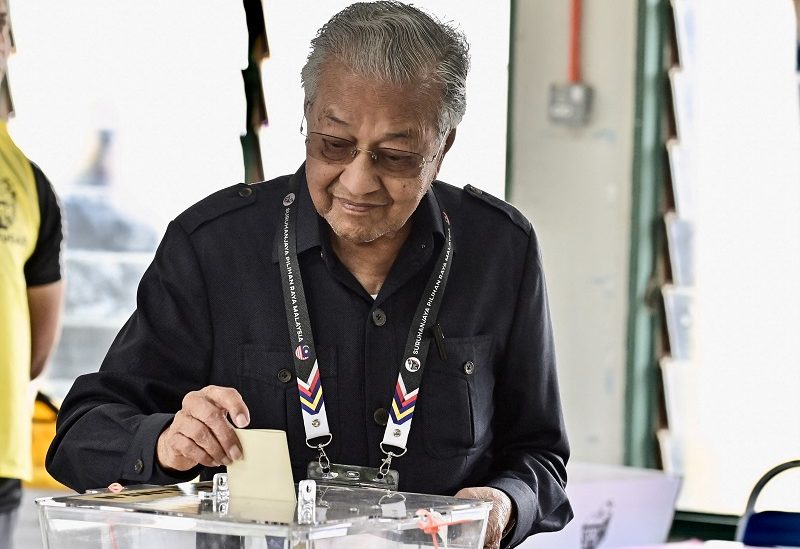 After four years of political instability in Kuala Lumpur’s power corridors, Malaysians began to vote in country’s general elections on Saturday. Three prime ministers have governed the Southeast Asian nation after last election was fought on the issue of corruption four years ago. Pollsters have predicted a close contest between long-time opposition leader Anwar Ibrahim and blocs led by current Prime Minister Ismail Sabri Yaakob and former PM Muhyiddin Yassin.
In a staunchly battled out election campaign, issues such as corruption, climate change and the state of economy due to effects of COVID-19 pandemic remained key highlights prior to Saturday’s polling.
Weather forecasters have predicted heavy rain on polling day, threatening the voter turnout. Officials, however, said that the election will go on as scheduled.
The politics in Malaysia has been dominated by the 2015 1MDB corruption scandal, which reportedly led to billions of dollars being embezzled out of the country. The scandal led to the ouster of former Prime Minister Najib Rajak, who is now facing a 12-year prison sentence for corruption.
Prime Minister Ismail Sabri Yaakob, who came to power last year, is aiming to win a stronger mandate. However, he is seen to be losing the popularity contest to Opposition leader Anwar Ibrahim and former Prime Minister Muhyiddin Yassin.
Pollsters say that there is strong support for former deputy Prime Minister and opposition leader Anwar Ibrahim’s Pakatan Harapan (PH) coalition.
Mahathir Mohamad, who has served as Malaysian Prime Minister cumulatively for 24 years, too is seeking re-election. The 97-year-old veteran leader, was ousted as Prime Minister by his own party two years ago after becoming the country’s leader for a second time in 2018.
Mahathir Mohamad will defend his stronghold seat in the resort island of Langkawi with his newly formed ethnic Malay alliance Gerakan Tanah Air, or Homeland Movement. While he is expected to win his own support, pollsters say he is unlikely to return as prime minister.
Nearly 1,000 candidates will be vying for 222 seats in Parliament.
Selangor-based Merdeka Center predicted on Friday that opposition leader Anwar Ibrahim’s reformist Pakatan Harapan coalition was on course to take 82 seats, Muhyiddin’s Perikatan Nasional alliance, gaining momentum among Malays at 43 seats, Ismail’s Barisan at 15 but 45 too close to call.
Anwar was the top choice for prime minister at 33 per cent, followed by Muhyiddin at 26 per cent and Ismail at 17 per cent, according to Merdeka Center.
Anwar last came close to being Prime Minister in 2020 but a power struggle in his coalition denied him the chance. His more than two decades as an opposition figure have included nine years in jail for sodomy and corruption, charges he says were politically motivated.
He was released from prison in 2018 after joining with former Prime Minister Mahathir Mohamad, both his mentor and long-time rival, to defeat Barisan Party for the first time in Malaysia’s history amid public anger at the government over the multibillion-dollar 1MDB scandal.
That coalition collapsed after 22 months in power due to infighting over a promise by Mahathir to hand the premiership to Anwar. Muhyiddin briefly became Prime Minister. But his administration collapsed last year, paving the way for Barisan Party’s return to power with Ismail Sabri Yaakob at the helm.