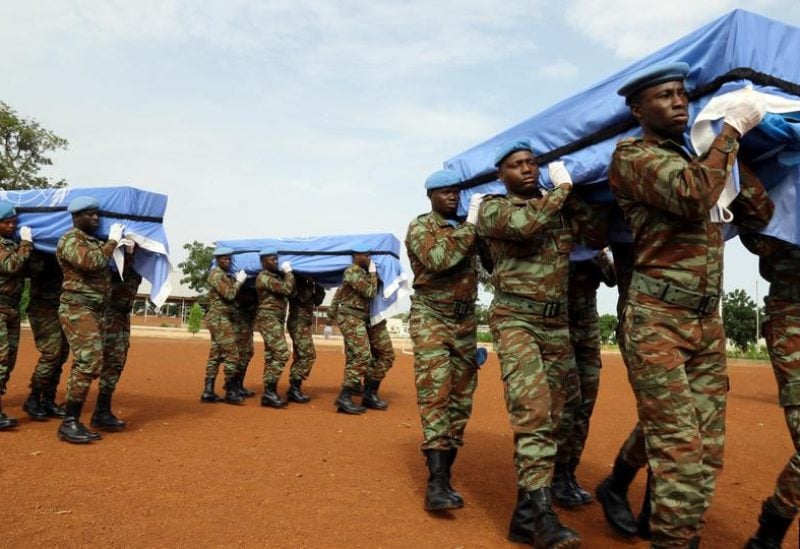 U.N. peacekeepers carry the coffins of the three United Nations soldiers from Bangladesh, who were killed by an explosive device in northern Mali on Sunday, during a ceremony at the MINUSMA base in Bamako, Mali September 27, 2017. REUTERS/Moustapha Diallo

The United Nations peacekeeping force MINUSMA announced on Wednesday that a man had been given a death sentence in Mali for an incident that claimed the lives of three peacekeepers in 2019. The defendant was not named.

Mali, a dry nation in West Africa ruled by a military junta, has been fighting an Islamist insurgency for ten years; yet, despite expensive international efforts to put an end to it, it has expanded to other parts of the Sahel.

U.N. peacekeepers have been deployed in Mali since 2013 but their presence has not stopped militants linked to al Qaeda and Islamic State from attacking villages and towns, army bases and police stations.

The trial centred on an attack on five peacekeepers travelling through the rural commune of Siby in southern Mali, around 50 kilometres from the capital Bamako, on February 22, 2019. Three were killed.

Bamako’s criminal court on Tuesday convicted the man of acts of terrorism, criminal association, murder, robbery and illegal possession of firearms in connection with the Siby attack, MINUSMA said.

Judges imposed the death penalty, which has not been carried out in Mali since a moratorium was placed on executions in 1980.

The MINUSMA statement did not name the convicted man and gave no details about what plea he entered. The court could not be reached for comment.

MINUSMA has deployed over 13,000 troops to contain the violence, which is concentrated in Mali’s north and centre.

The mission has recorded 281 fatalities of MINUSMA personnel, many killed when convoys hit improvised explosive devices planted by the insurgents.