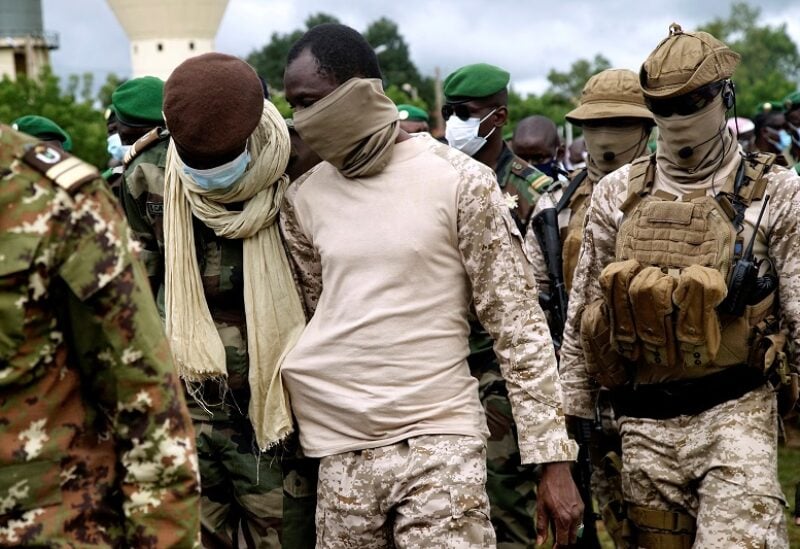 FILE PHOTO: Colonel Assimi Goita, the junta leader of the National Committee for the Salvation of the People (CNSP) which overthrew Mali's President Ibrahim Boubacar Keita attends an honour ceremony for the ten Malian soldiers that the army said were killed in militant attacks in Gueri town, at the army headquarters in Kati, Mali September 6, 2020. REUTERS/Matthieu Rosier/File Photo

After a pair of terror attacks killed dozens of soldiers over the weekend, Authorities in Mali have declared three days of mourning beginning Thursday.

In the most deadly incident, 42 soldiers were killed and 22 others injured in an attack on Sunday near the town of Tessit in the Gao Region. The government said the “complex and coordinated attack” involved drones, car bombs and artillery, blaming an affiliate of the so-called “Islamic State” (IS) group.

Later that day, five police officers were killed when extremists attacked a police station in the town of Sona, near the border with Burkina Faso. Soulaimane Traore, director-general of the national police, said three other officers remain missing. The following day, militants belonging to the al-Qaeda affiliate group JNIM claimed responsibility
Mali is ruled by a military junta after Colonel Assimi Goita overthrew the democratic government in 2020, in part over frustration at its failure to rein in years of insurgency. Terrorist attacks have nevertheless remained common.

After Goita’s coup, Mali’s traditional security partner and former colonizer, France, withdrew its military forces. Observers fear this has created a power vacuum for yet more attacks to occur.

The country now looks to Russia and Russia-backed mercinaries from the Wagner group for equipment, training and support.

In June this year, the current leadership announced another three-day mourning period after members of the Katibat Macina Islamist group massacred 132 civilians in Diallassagou and two surrounding villages in the Mopti Region.