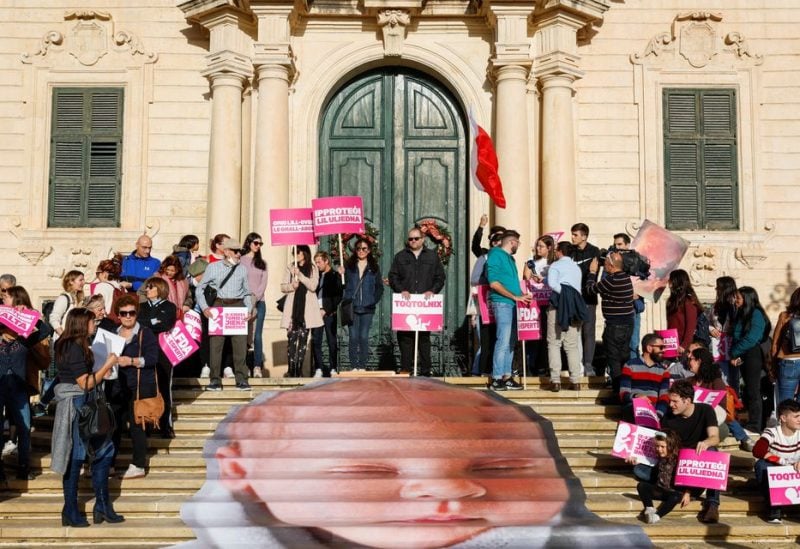 People gather outside the Auberge de Castille, the office of the Prime Minister, to protest against government plans to introduce a law that they view as opening the door to abortion in the only European Union country which does not permit it under any circumstances, in Valletta, Malta December 4, 2022 - REUTERS

On Sunday, protesters gathered outside the office of Malta’s prime minister with a sizable image of an unborn child, urging the government to abandon plans to change the nation’s stringent anti-abortion laws.

The largest protest in years drew thousands of participants, including Malta’s top Catholic bishop and the head of the conservative opposition, but it was spearheaded by Marie Louise Coleiro Preca, a former president of the center-left.

Traditionally Catholic Malta is the only member of the European Union which bans abortion in all circumstances, even when a woman’s life or health is endangered by her pregnancy.

Last week, Health Minister Chris Fearne presented an amendment in parliament that would make doctors no longer risk up to four years’ imprisonment if their intervention to help women with severe health issues causes the end of a pregnancy.

To date, no doctor has been prosecuted on such charges.

The center-right opposition, the powerful Catholic Church and some NGOs have described the law as not needed and paving the way for a full liberalization of abortion, a claim rejected by the ruling center-left Labour party.

Prime Minister Robert Abela’s government holds a comfortable majority, and no dissent has appeared within its ranks, but opinion polls show a big majority against abortion, particularly among older people.

The decision to alter abortion laws was made as a result of the denial of Andrea Prudente’s request to end a non-viable pregnancy in June after she started bleeding heavily.

She was eventually transferred to Spain, where she had an abortion, after her doctors declared that she was in danger of dying. Later, she filed a lawsuit against the Maltese government, requesting that the courts rule that prohibiting abortion in any situation is against human rights.

Trial in the case has not yet taken place.