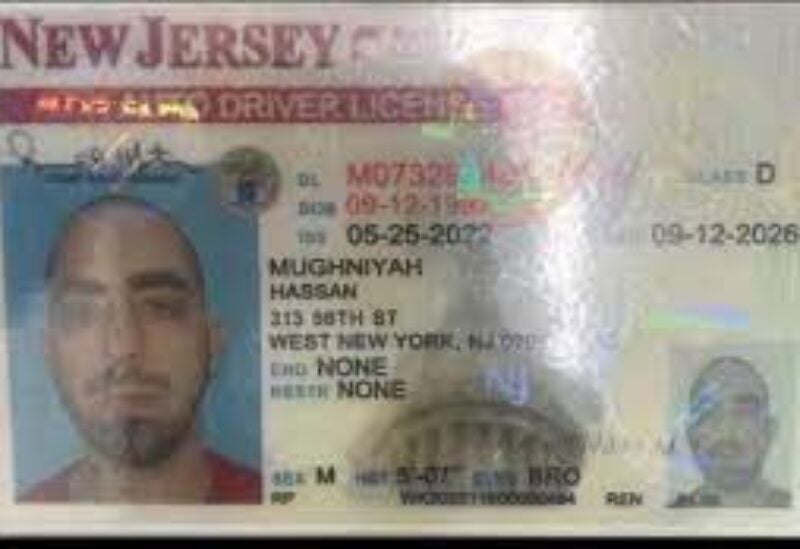 The man accused of stabbing author Salman Rushdie held a fake driver’s license bearing the surname of an infamous Hezbollah commander, it has been claimed.

That driver’s license, which was was found on 24-year-old Hadi Mater bore the name Hassan Mughniyah. Both the first and second names are linked to infamous terrorist organization Hezbollah. The group’s current leader is named Hassan Nasrallah. While one of the group’s most notorious figures was Imad Mughniyeh, who was killed in a CIA-linked assassination in Syria in 2008.
NBC New York reports that Mater’s social media accounts showed that he was sympathetic to Shia causes, including supporting the Iranian Revolutionary Guard Corps.

Since the 1980s, the IRGC have been linked to Hezbollah, offering training and funding to the primarily Lebanon-based terrorist organization. Hezbollah’s logo is based on the IRGC’s.

According to the Council on Foreign Relation’s profile on Hezbollah: ‘The Iran-backed group is driven by its opposition to Israel and its resistance to Western influence in the Middle East.’

Witnesses to the stabbing say that the suspect wore black clothing and a black mask during the attack on The Satanic Verses author in Buffalo on Friday.

Rushdie is on a ventilator, cannot speak, and will likely lose an eye, after being stabbed up to 15 times on Friday by a suspect police have identified as a man from New Jersey ‘with sympathies toward the Iranian government.’

The Algemeiner reports that a Twitter account linked to the Iranian state media, ‘Iran in Arabic,’ posted a photo of Matar next to a picture of Salman Rushdie with the words: ‘Lebanese hero who stabbed Satan Salman Rushdie, author of The Satanic Verses, in which he insulted the Prophet of guidance and mercy, the Messenger of God, Muhammad.’
According to the Daily Beast, Mater moved from California to New Jersey in 2014. Matar attended the Elizabeth Learning Center in Cudahy, California, just outside of Los Angeles.

A classmate of the suspect, Gabriel Sanchez, told the website that Matar was a ‘very devout Muslim.’

He added: ‘He took it seriously and did the washing of the feet in our high school restroom.’

Sanchez went on: ‘The only time I ever saw him get ‘heated’ when it came to anything was with our AP Bio teacher at the end of the year where he wrote in his evaluation of the class that he hated how he talked about religion.’

He continued: ‘He was a devout Muslim and one of the few things that I remember talking to him about was kindness. That’s how I remember him and why I wish this isn’t him.’

The bloodied Rushdie, 75, who has been the subject of death threats from the Iranian regime since 1989, was airlifted to the hospital and his condition was updated by his agent Andrew Wylie shortly before 7 p.m.

‘The news is not good,’ Wylie said in a statement. ‘Salman will likely lose one eye; the nerves in his arm were severed; and his liver was stabbed and damaged.’

Rushdie was attacked and stabbed multiple times, including in the neck and abdomen, as he was being introduced for the CHQ 2022 event in Chautauqua, near Buffalo, on Friday morning.

Matar, who police say gained access to the grounds with a pass, managed to walk off the stage before being restrained, as people rushed to assist Rushdie.
Law enforcement sources told The New York Post that an initial investigation suggests Matar is sympathetic to the Iranian regime and the Islamic Revolutionary Guard, although he was born around nine years after the fatwa against Rushdie was first issued.

Event moderator Henry Reese, 73, a co-founder of an organization that offers residencies to writers facing persecution, was also attacked. He and Rushdie were due to discuss the United States as a refuge for writers and other artists in exile.

Reese was released from a hospital on Friday afternoon, and in an emailed statement to the New York Times, called Rushdie ‘one of the great defenders of freedom of speech and freedom of creative expression,’ then added: ‘The fact that this attack could occur in the United States is indicative of the threats to writers from many governments and from many individuals and organizations.’
Rushdie’s novel was viewed as blasphemous by many Muslims in the 1980s, and at least 45 people were killed in riots over the book, leading to it being banned in Iran, where the late leader Grand Ayatollah Ruhollah Khomeini issued a 1989 fatwa, calling for Rushdie’s death.

The death threats and bounty led Rushdie to go into hiding under a British government-funded protection program, until he emerged after nine years of seclusion and cautiously resumed more public appearances, maintaining his outspoken criticism of religious extremism overall. He has been in the United States since 2000.

The attack occurred at the Chautauqua Institution, which hosts arts programs in a tranquil lakeside community 70 miles south of Buffalo.
Another witness, John Stein, told ABC that the assailant ‘started stabbing on the right side of the head, of the neck. And there was blood… erupting.’ Blood was spattered on the wall behind where Rushdie had been attacked, with some also seen on a chair that he had been sitting on.

Governor Kathy Hochul called the attack on Rushdie ‘heartbreaking’ before confirming that he is ‘alive’, during an unrelated press conference.

She added that he is ‘getting the care he needs at a local hospital’, and that a state police trooper ‘stood up and saved his life’ after the attack.

One witness told the New York Times that Rushdie had been stabbed ‘multiple times’ and was lying in a pool of his own blood.
Rita Landman offered her assistance after the incident, adding that he appeared to be alive and did not receive CPR.

Roger Warner of Cleveland, Ohio, was sitting on the front row when the attack took place, adding: ‘He was covered with blood and there was blood running down onto the floor.

‘I just saw blood all around his eyes and running down his cheek.’

Rushdie’s London-based son Zafar, 42, is aware of the incident.

Thousands of people in the audience gasped at the sight of the attack and were then evacuated as his alleged attacker was taken into custody.

John Bulette, 85, who witnessed the attack said: ‘There was a huge security lapse. That somebody could get that close without any intervention was frightening.’

An usher at the amphitheater claims that the security at the Institution was ‘lax’ and that no additional measures were in place for Mr Rushdie’s visit.

Kyle Doershuk, 20, said: ‘It’s very open, it’s very accessible, it’s a very relaxed environment, in my opinion something like this was just waiting to happen.’

A Chautauqua Institution spokesperson added: ‘We are dealing with an emergency situation. I can share no further details at this time.’

He said: ‘This guy ran on to platform and started pounding on Mr. Rushdie. At first you’re like, ‘What’s going on?’

And then it became abundantly clear in a few seconds that he was being beaten.’
A representative for the Iranian interests section at the embassy of Pakistan in Washington D.C. declined to comment on the attack.

The embassy diplomatically represents the government of Iran in the United States.

They told the New York Times ‘we are not getting involved in this’, before hanging up and refusing to give a name.

Senator George Borrello branded the attack as ‘shocking’ adding that there is ‘no room’ for ‘beliefs that demand that you kill someone who disagrees with you’.

He added: ‘This shocking attack on a celebrated and noted author, apparently prompted by fundamentalist extremism, has no place in America.’
UK Prime Minister Boris Johnson said: ‘Appalled that Sir Salman Rushdie has been stabbed while exercising a right we should never cease to defend.
‘Right now my thoughts are with his loved ones. We are all hoping he is okay.’

Author Ian McEwan issued a statement about Rushdie, saying: ‘This appalling attack on my dear friend Salman represents an assault on freedom of thought and speech.

‘These are the freedoms that underpin all our rights and liberties.

‘Salman has been an inspirational defender of persecuted writers and journalists across the world.

‘He is a fiery and generous spirit, a man of immense talent and courage, and he will not be deterred.’

The author was knighted in 2007 in Britain ‘for services to literature’ by his friend, then Prime Minister Tony Blair.

His last piece of writing was about an assassination attempt, serializing a novella called The Seventh Wave on Sub Stack, which appeared to focus on spies and assassinations.

Rushdie has previously received death threats for his writing, with his book the Satanic Verses which supposedly insulted the Prophet Mohammed and The Koran.

He wrote the Satanic Verses, which resulted in a culture war being sparked in 1988 in Britain – with protests taking place in the UK along with book burnings.

Pakistan banned the book, and he was issued a fatwa – a death sentence – by Iran’s Ayatollah Khomeini in February 1989.

Khomeini called for the death of Rushdie and his publishers, and also called for Muslims to point him out to those who could kill him if they could not themselves.

The fatwa, or ‘spiritual opinion’, followed a wave of book burnings in Britain and rioting across the Muslim world which led to the deaths of 60 people and hundreds being injured.
Rushdie was put under round-the-clock security from 1989 to 2002, at the expense of the British taxpayer, when a $3million bounty was put on his head.

He was forced to go into hiding for a decade with police protection, and previously said he received a ‘sort of Valentines card’ from Iran each year letting him know the country has not forgotten the vow to kill him.

In 2012, a semi-official Iranian religious foundation raised the bounty for Rushdie from $2.8 million to $3.3 million.

After the attack Rushdie, who moved to the US in 2000, was quickly surrounded by a small group of people who held up his legs, presumably to send more blood to his chest.

The author previously complained about having ‘too much’ security while attending other events.

He told reporters a the Prague Writer’s Festival: ‘To be here and to find a large security operation around me has actually felt a little embarrassing.

‘I thought it was really unnecessary and kind of excessive and was certainly not arranged on my request.

‘I spent a great deal of time before I came here saying that I really didn’t want that.

‘So I was very surprised to arrive here and discover a really quite substantial operation, because it felt like being in a time warp, that I had gone back in time several years.’

Rushdie is a former president of PEN America, with their current CEO Suzanne Nossel issuing a statement which said: ‘PEN America is reeling from shock and horror at word of a brutal, premeditated attack on our former President and stalwart ally, Salman Rushdie, who was reportedly stabbed multiple times while on stage speaking at the Chautauqua Institute in upstate New York.