‘Many cities’ in Ukraine hit by missile attack amid escalation 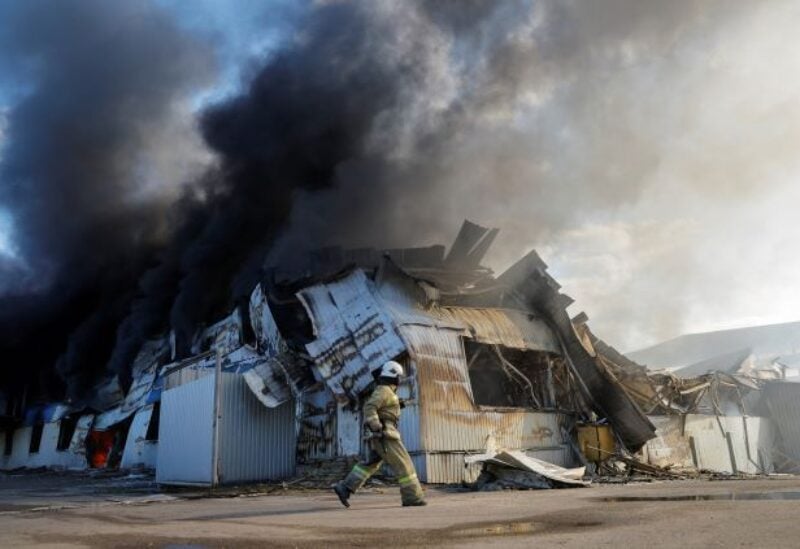 A firefighter works to extinguish fire at the printing house following recent shelling in the course of Ukraine-Russia conflict in Donetsk, Russian-controlled Ukraine, October 8, 2022. REUTERS

Ukraine’s presidency says strikes have been reported in “many” cities in Ukraine, a day after Moscow blamed Kyiv for an explosion on a bridge connecting Crimea to Russia.

“Ukraine is under missile attack. There is information about strikes in many cities of our country,” Kyrylo Tymoshenko, deputy head of the president’s office, said on social media, calling on the population to “stay in shelters”.

Several large explosions have been heard in the Ukrainian capital Kyiv a day after President Vladimir Putin blamed Ukraine for a deadly explosion on a key bridge connecting the Crimean Peninsula to mainland Russia.

“Several explosions in the Shevchenkivskyi district, in the city centre,” Mayor Vitali Klitschko wrote on Telegram on Monday.

The explosions took place around 8:15am (05:15 GMT), with air raid sirens sounding in the Ukrainian capital more than an hour before the blasts.

The spokesperson for Emergency Service in Kyiv told AP that there were reports of casualties but the number was not yet known.

Rescuers were at work in different locations, Svitlana Vodolaga said.

Ukrainian forces retook large areas around Kyiv in early April after Russia abandoned its push towards the capital.

The Russian president has come under increasing pressure after suffering a series of military setbacks in recent weeks. He continued reshuffling his military leadership, appointing a new general to lead the war.

Thousands of Russian soldiers retreated from the front-line area in the eastern Luhansk region in recent days, as Ukrainian forces continue to make progress towards Russian-held Kreminna.

Western weaponry has helped the Ukraine military win back more territory in the past month than Russian forces seized in five months.