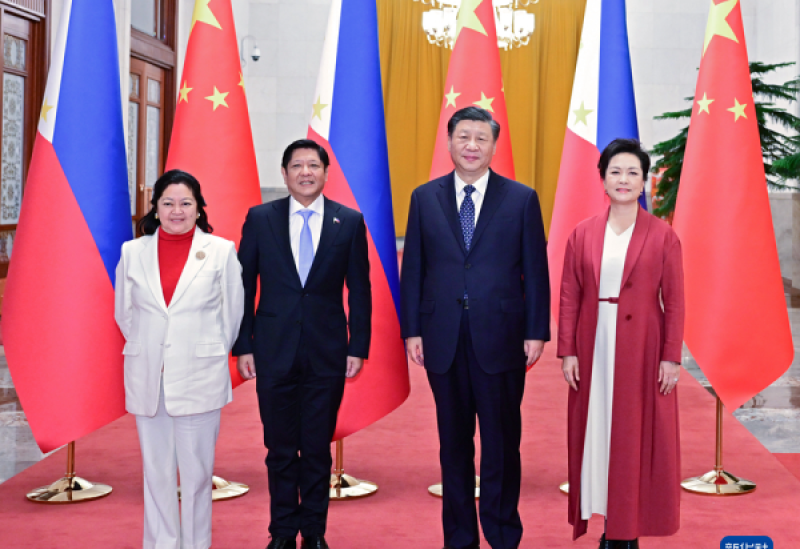 Marcos’ two-day trip to China is his first since taking office as president in June. It occurs as the two countries work to recover from economic crises brought on by the COVID-19 epidemic and amid heightened tensions over territory issues in the South China Sea.

“We are hoping that after the pandemic becomes more manageable, that we will not only return to the path that we were on before the pandemic, but that we even build up to greater heights,” Marcos said during his meeting with Xi, as quoted in a statement by his office.

The 14 deals his delegation signed covered agriculture, maritime security, and tourism, as well as “an arrangement for the establishment of a communication mechanism on maritime issues” between their foreign ministries.

Marcos said before his departure to Beijing on Tuesday that his administration was seeking to “open a new chapter” and resolve political and security “issues” with China during the trip.

He did not specify the issues, but the Philippine Foreign Affairs Ministry said that one of them would be related to the South China Sea.

The strategic and resource-rich waterway has been claimed by China almost in its entirety, but other countries, including the Philippines, Vietnam, Malaysia and Brunei, also have overlapping claims.

The Philippines has filed hundreds of diplomatic protests against China’s activity in the maritime region in the past few years, after an international tribunal in The Hague dismissed Beijing’s sweeping claims to the region in 2016.

Chinese vessels, however, continue to be spotted in the Philippine part of the territory, the West Philippine Sea, and new military facilities and airstrips have also been spotted there.

“The two nations should be good neighbors who help each other,” he said, as quoted by the Chinese state broadcaster CCTV.

“The two nations can bring more benefits to the people of the two countries and contribute more positive energy to regional peace and stability.”

With bilateral trade worth $29.1 billion between January and September of last year, China is the Philippines’ largest trading partner. Asia’s economic giant is also a major source of foreign direct investment for the archipelagic nation.

As such, “it was only natural that President Marcos Jr. would seek stable relations with and economic benefits from China,” Greg Poling, director at Washington-based Asia Maritime Transparency Initiation, told Arab News.

He added that a communication mechanism on the South China Sea would likely help stabilize tensions between Manila and Beijing.

“This year has seen a steady drumbeat of coercive behavior and violent incidents from China in the South China Sea, and so this new hotline between foreign affairs ministries is an effort to stabilize the situation,” Poling said.

“This is all to be expected and could have a positive impact on Sino-Philippine relations in the short term. But it doesn’t alter the longer-term tensions between the two.”