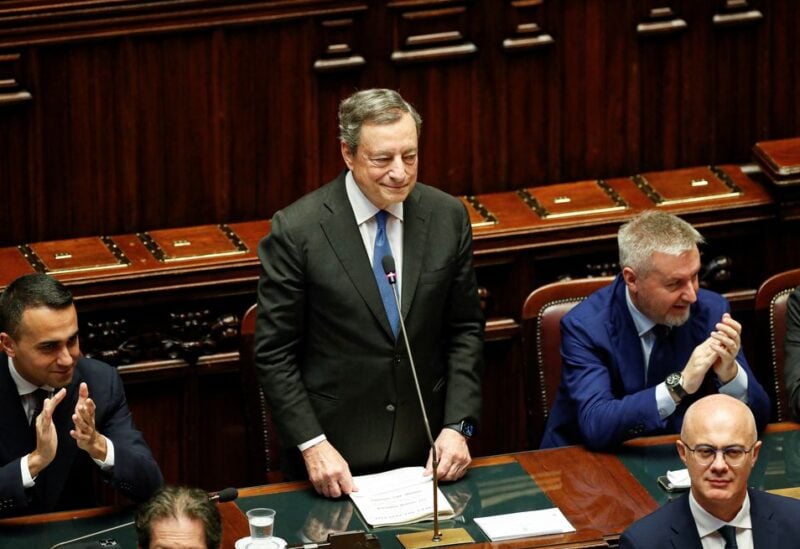 Italy's Prime Minister Mario Draghi looks on during his address to the lower house of parliament ahead of a vote of confidence for the government after he tendered his resignation last week in the wake of a mutiny by a coalition partner, in Rome, Italy July 21, 2022. REUTERS/Remo Casilli

Mario Draghi, the Italian prime minister, resigned on Thursday after his national unity government disintegrated, setting the nation up for an early election and roiling the financial markets.

In a meeting with President Sergio Mattarella, former central banker Draghi, who was not elected and has been in charge of a large coalition for almost 18 months, announced his resignation.

Mattarella plans to meet the speakers of both houses of parliament on Thursday afternoon. Political sources said earlier this week that he would likely dissolve parliament and call early an election in October.

He has asked Draghi to stay on in a caretaker capacity.

A bloc of conservative parties, led by the far-right Brothers of Italy, looks likely to win a clear majority at the next election, a study of opinion polls showed this week.

Draghi’s coalition crumbled on Wednesday when three of his main partners snubbed a confidence vote he had called to try to end divisions and renew their fractious alliance.

He had tried to reassert his authority as parties began to pull in different directions before the planned end of the legislature in the first half of next year.

The political crisis has up-ended months of stability in Italy, during which Draghi had helped shape Europe’s tough response to Russia’s invasion of Ukraine and had boosted the country’s standing in financial markets.

“I’m convinced that the active support of Italian people for Ukraine will continue,” he said on Twitter.

Draghi drew warm applause from lawmakers when he made a brief appearance in the lower house of parliament on Thursday.

“Even central bankers have their hearts touched sometimes,” he quipped as he received the ovation.

Draghi claimed he had backing from Italians to carry on as prime minister and steer the country through what looks like being a tough winter.

“The fact that there is yet another government crisis only certifies the umpteenth inability of our politicians to govern for the people, and instead govern only for themselves,” said Marco Anastasi, 29, a gym instructor from Milan.

Italian bond and stocks sold off sharply on concerns that the political crisis would delay reforms needed as Italy taps into post-pandemic recovery funds from the European Union.

The Italian 10-year government bond yield shot up more than 20 basis points to 3.744%, its highest level for four weeks after the European Central Bank raised the cost of borrowing.

“It is a big blow to Italy’s ability to deliver policies and reforms over the near term,” said Lorenzo Codogno, head of LC Macro Advisers and a former senior Italian Treasury official. “There will be delays and disruptions with early elections, and most likely no budget by year-end.”

In a first impact from Draghi’s resignation, political parties are set to drop plans to reform business licences for taxi drivers, according to political sources. The issue had sparked protests in Rome in recent days.

In a sign of the tensions brought to the surface by the end of the Draghi government, two ministers from Forza Italia said they would leave the centre-right party in protest.