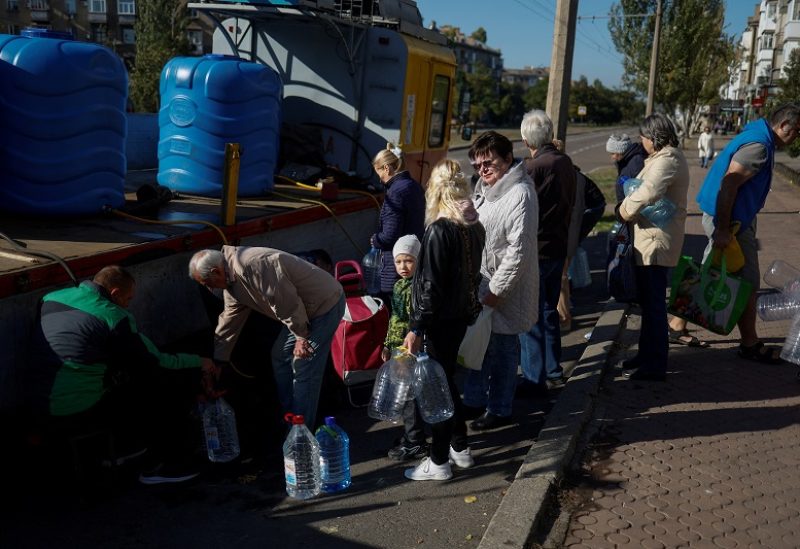 Local people fill up bottles with fresh drinking water, as the main supply pipeline for drinking water for the city was damaged in Kherson region at the beginning of Russia's attack on Ukraine, in Mykolaiv, Ukraine October 16, 2022. REUTERS/Valentyn Ogirenko

“Mass deportation” of residents in the Kherson region, is what Ukraine is accusing Moscow of orchestrating, after illegally occupied for months and annexed after a sham referendum in late September.
Moscow has enacted martial law in eastern Ukraine and says it is “evacuating” residents while it fires missiles around the country.
“Putin’s martial law in the annexed regions of Ukraine is preparation for the mass deportation of the Ukrainian population to depressed areas of Russia in order to change the ethnic composition of the occupied territory,” Oleksiy Danilov, secretary of Ukraine’s National Security and Defense Council, said on Wednesday.
Sergiy Khlan, an aide to the ousted head of the Kherson region, accused Putin of attempting to foment panic in the region for propaganda purposes.
He said the relocation of residents, which he called “equivalent to deportation,” was being used by Moscow as a pretext to justify Russia’s “withdrawal from Kherson and more generally from the right bank” of the Dnieper River
Vladimir Saldo, the Kherson region’s new Moscow-installed head, told Russian state television that his administration would relocate east of the Dnieper.
Russian authorities said almost 5 million Ukrainian residents have relocated to Russia since the invasion in February.
Russia’s deputy envoy to the United Nations, Dmitry Polyanskiy, said on Wednesday that Moscow might “reassess” its working relationship with UN Secretary-General Antonio Guterres if the UN head goes ahead with an inspection of drones recovered by Ukraine.
Ukraine this week invited UN experts to inspect some downed drones, which were allegedly supplied to Russia by Iran. Guterres reports twice a year to the Security Council on the implementation of the 2015 Iran nuclear deal, and an assessment of Iranian drones in Ukraine would likely be included in that report.
Iran and Russia say the UN has no mandate to inspect the drones recovered by Ukraine.
Speaking to reporters after a closed-door Security Council meeting on Wednesday about Moscow’s use of drones, Polyanskiy called on Guterres to “abstain from engaging in any illegitimate investigation.”

“Otherwise, we will have to reassess our collaboration with them, which is hardly in anyone’s interests,” he added, without further explanation. “We do not want to do it, but there will be no other choice.”