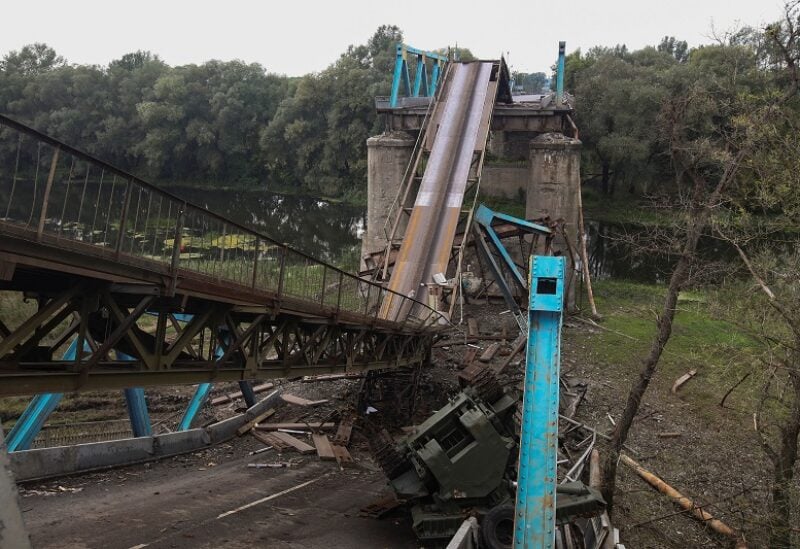 A military vehicle is seen near a destroyed bridge over the Siverskyi Donets river in the town of Izium recently liberated by the Ukrainian Armed Forces during a counteroffensive operation, amid Russia's attack on Ukraine, in Kharkiv region, Ukraine September 15, 2022. REUTERS/Vyacheslav Madiyevskyy

A mass burial site has been found in the city of Izium, said Ukraine President Volodymyr Zelensky on Thursday, following the re-capture of the areas last weekend. The necessary procedural actions have already started there, more information, clear and verified, should be available tomorrow,” Zelensky said in his nightly address.
“Bucha, Mariupol and now, unfortunately, Izium… Russia leaves death everywhere. And must be responsible for it. The world must hold Russia to real responsibility for this war. We will do everything for this,” he added.

The mass grave had more than 440 bodies, including some people killed by shelling and air strikes. The Russian forces had been using it as a logistics hub in the Kharkiv region. They left behind large amounts of ammunition and equipment.

“I can say it is one of the largest burial sites in a big town in liberated (areas)… 440 bodies were buried in one place,” Serhiy Bolvinov, the chief police investigator for Kharkiv region, told Sky News. “Some died because of artillery fire … some died because of air strikes.”

Ukraine compared the discovery to what happened in Bucha, on the outskirts of the capital Kyiv in the early stages of the invasion. Ukraine and its Western allies have accused Russian forces of perpetrating war crimes there. Tens of thousands of civilians were likely killed in a separate Russian assault on the southern port of Mariupol, Ukrainian officials said in April.