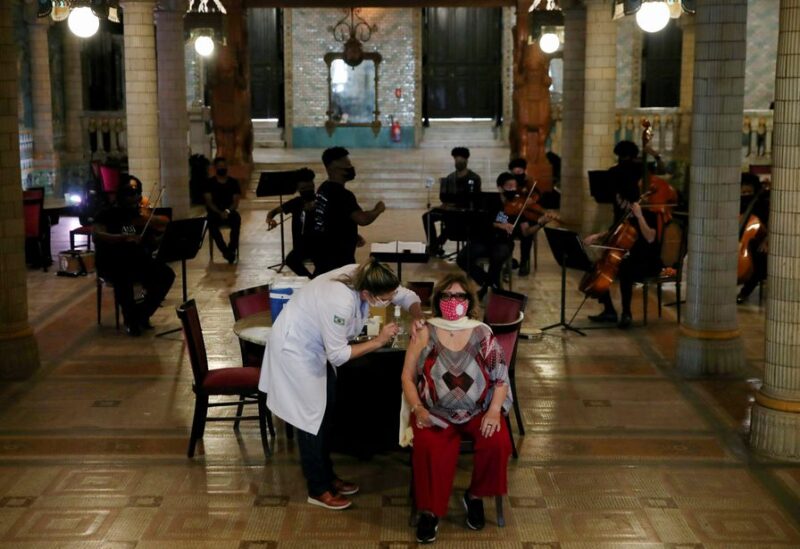 A health worker applies an AstraZeneca coronavirus disease (COVID-19) vaccine to a citizen during a vaccination day at the Municipal Theater in Rio de Janeiro, Brazil, May 27, 2021. REUTERS/Ricardo Moraes

Serrana, a city in southeastern Brazilian state of Sao Paulo, has seen a 95% drop in COVID-19 deaths after it concluded vaccination of almost all adults, TV Globo reported on Sunday.

With 45,000 inhabitants Serrana is a healthy oasis in Brazil, which has the world’s second deadliest outbreak with more than 461,000 deaths so far and a very slow immunization pace due to the lack of vaccines.

Serrana was the subject of a study by Instituto Butantan, which produces the Coronavac vaccine developed by China’s Sinovac Biotech in Brazil.

When vaccination was starting, the city had an increase in COVID cases, but the spread of the virus was contained once 75% of the population was immunized, scientists found.

Scientists divided the city in four areas to try to understand which was the threshold to contain the spread of the virus and found that it was controlled after three areas received the second dose.

The number of symptomatic cases fell 80%, and hospitalizations 86%. COVID deaths fell 95%, according to data given by Butantan to TV Globo.

Serrana is surrounded by cities that are still dealing with a spike in COVID cases. Ribeirao Preto, 15 miles away from Serrana, is going through a lockdown to try to contain the spread of COVID-19.

A similar experiment is underway in another city in Sao Paulo, Brazil’s richest state. The city of Botucatu expects to immunize most of its 148,000 inhabitants with the Astra Zeneca vaccine.