McCarthy loses third round vote for US House speaker 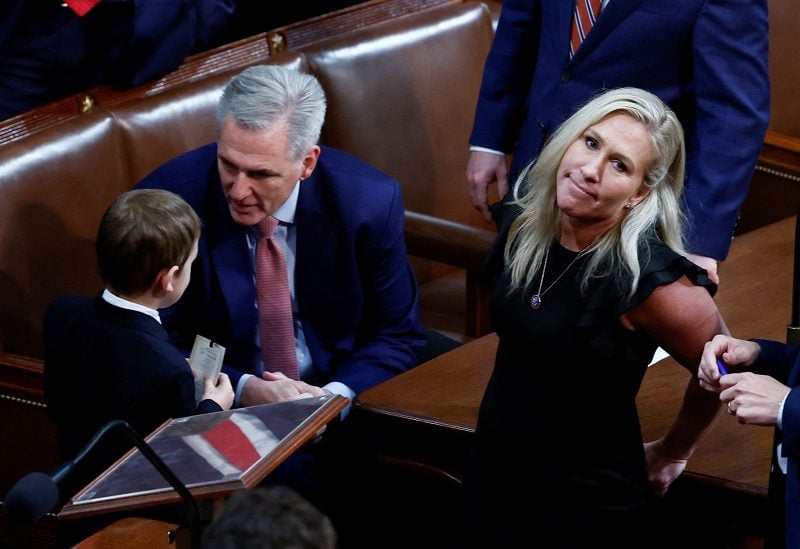 House Republican leader Kevin McCarthy (R-CA) talks with a young boy brought to meet him by Rep. Marjorie Taylor Greene (R-GA) just before the start of a second round of voting in the race to be the next Speaker of the House in the House Chamber on the first day of the 118th Congress at the U.S. Capitol in Washington, U.S., January 3, 2023. REUTERS/Evelyn Hockstein

In a third round of voting, Republican leader Kevin McCarthy on Tuesday failed to secure enough votes to be elected as the speaker of the US House of Representatives

The first round of voting saw at least 19 defections from his own party when he could only afford to lose four seats. In the second and third rounds of voting that followed, McCarthy failed to secure enough votes from fellow Republicans to secure the speakership.

Rep. Jim Jordan of Ohio, who received six votes in the first ballot, said after McCarthy failed to secure enough votes that the top job in the House should go to McCarthy.

However, he was followed by Rep. Matt Gaetz of Florida who offered a second ringing endorsement of Jordan.

Gaetz followed his endorsement by voting again for Jordan along with a bloc of several far-right members of the House.

Before the third round of voting kicked off, Republican Rep. Chip Roy of Texas stood to nominate Jordan, while noting Jordan was not seeking the nomination.

McCarthy needs at least 218 votes to formally become speaker of the House, which has 435 members.
Following a tumultuous three rounds of voting in which neither McCarthy nor Democratic Rep. Hakeem Jeffries of New York secured enough votes for the speakership, the House approved a motion to adjourn until 12:00 p.m. (1700 UTC) Wednesday. Voting will continue then until a speaker is selected.

McCarthy won the majority of the Republican vote in a November meeting behind closed doors, while Democrats unanimously chose New York Congressman Hakeem Jeffries to become their leader as they transition into the minority in the House.

Since McCarthy has failed to secure enough House votes, he becomes the first majority nominee for speaker in 100 years to fail an initial vote for the gavel.

If a candidate does not get the majority of the votes of the lawmakers present on the House floor, it goes to a second ballot and so on.

A speaker can win fewer than 218 votes, as outgoing House speaker Nancy Pelosi did, if some lawmakers are absent or simply vote present.
The US Congress is composed of the Senate and the House of Representatives. In the most recent election of 2022, Democrats maintained their majority in the Senate, while Republicans took control of the House by a narrow majority of 222 seats to Democrats 213 seats.

Members of both parties joined in on Tuesday’s vote for speaker, with lawmakers calling out the name of their choice for on the House floor in a so-called roll call vote.

The televised speaker vote, which is the first one the House takes part in, was the first round in what was expected to be a tough road for McCarthy.

What to know about Kevin McCarthy’s bid for speakership
Kevin McCarthy, a Republican from California, has lobbied fellow Republicans for months and offered extraordinary concessions to an outspoken bloc of conservatives.

He won the support of the majority of lawmakers to be the nominee for the speaker during an internal meeting of the party in November.

This is the second time the 57-year-old politician is seeking to be speaker of the House.

This is also the second time the House Republican leader is facing opposition from the party’s conservative flank.

McCarthy was once described as a “political junkie” and a “pragmatist, not a policy purist” by The Los Angeles Times.

The Republicans are officially set to take control of the US House on Tuesday, but new members can’t be sworn in until a speaker is elected.

The speaker effectively serves as the House’s presiding officer and the adminstrative head.

Lawmakers are also not obliged to vote for the party’s chosen candidate.

While it has been tradition for the speaker candidate to be a member of the House, it is not required. In past years, President Joe Biden and former President Donald Trump have received some votes for House speaker.