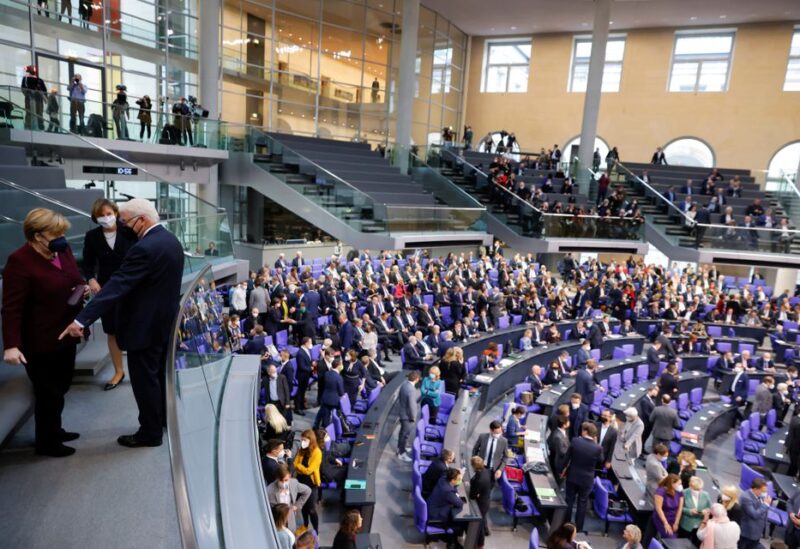 German lawmakers gathered on Tuesday, as a new parliament featuring more women and members from ethnic minorities than ever before met for the first time while outgoing chancellor Angela Merkel looked on from the visitors’ gallery.

Comprising lawmakers of the youngest ever average age and including the first two transgender women deputies, the lower house chamber, or Bundestag, convened to elect a speaker and other members of its presidium.

Merkel’s conservatives suffered their worst ever result in the national ballot of Sept. 26, when the new deputies were elected but in which she did not stand.

Her own approval ratings remain high, and she will stay in office in a caretaker capacity until the Bundestag chooses her successor, likely to be Olaf Scholz of the centre-left Social Democrats (SPD).

The SPD, who finished first in the election, are in talks to form a coalition government with the Greens and the pro-business Free Democrats by December 6 that would oust Merkel’s conservatives after 16 years in power. read more

The three parties are depicting their coalition – which would be the first of its kind at national level – as a new start for Germany that would have a focus on modernising Europe’s largest economy and combating climate change.

In negotiations so far they have projected a more consensual front than many expected, particularly given the ideological differences between the FDP and the more left-leaning Greens and SPD.

That could allay fears in Germany and beyond that the departure of Merkel, the dominant European leader of her generation, could herald a period of political instability.

The new Bundestag – the 20th in its post-war federal history – is also the largest ever, with 736 lawmakers.

It is not expected to pass any laws until a new coalition has been formed and it is required to vote in the new chancellor.