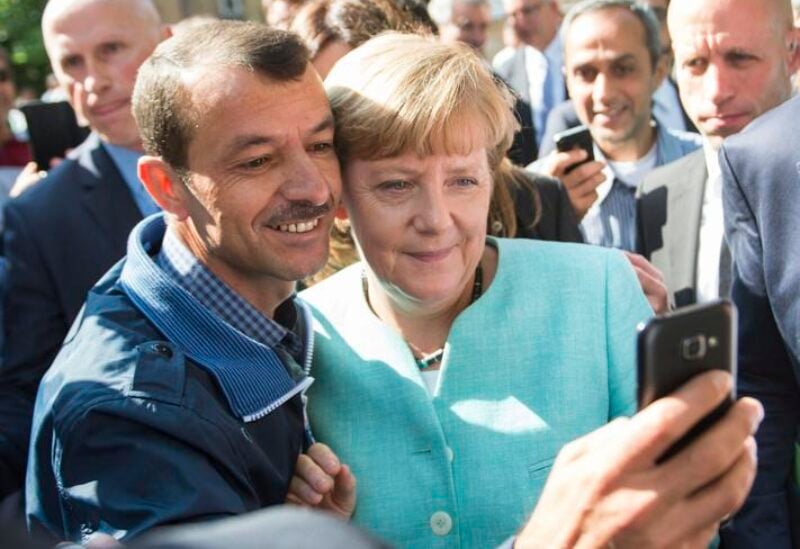 The UN refugee agency says it's giving its highest award to former German Chancellor Angela Merkel for her efforts to bring in more than 1 million refugees, mostly from Syria, into Germany. (AP)

In spite of considerable domestic and international criticism, the UN refugee agency said on Tuesday that former German Chancellor Angela Merkel will get its highest honor for her efforts to welcome more than 1 million migrants, the majority of whom are from Syria.

Merkel has been chosen as the newest recipient of the Nansen prize, which is given yearly by the Geneva-based UN agency, according to UN High Commissioner for Refugees spokesperson Matthew Saltmarsh.

“Under the then-Federal Chancellor Merkel’s leadership, Germany welcomed more than 1.2 million refugees and asylum-seekers in 2015 and 2016, which, as you will remember, was the height of the conflict in Syria, and there was deadly violence in other parts of the world,” Saltmarsh told reporters. “Dr. Merkel helped to highlight the plight of refugees globally.”

Merkel’s decision to let in so many migrants boosted the far-right Alternative for Germany party and resulted in protests by a vocal minority. She was also blasted by some governments for being too friendly to refugees, when some European Union partner states were closing borders to refugees and asylum-seekers.

The award includes a $150,000 prize. Merkel is expected to travel to Geneva next Monday to receive the award, Saltmarsh said. Four regional winners were also announced.

The UNHCR Nansen Refugee Award honors individuals, groups or organizations that go “above and beyond the call of duty” to protect refugees, other displaced and stateless people, the agency says.

More than 60 laureates have received the award since it was founded in 1954 to celebrate Fridtjof Nansen, a Norwegian scientist, explorer and diplomat who was the first commissioner for refugees in the League of Nations — the predecessor of the the United Nations
The recipient in 2021 was the Jeel Albena Association for Humanitarian Development in Yemen, for its support for displaced Yemenis.