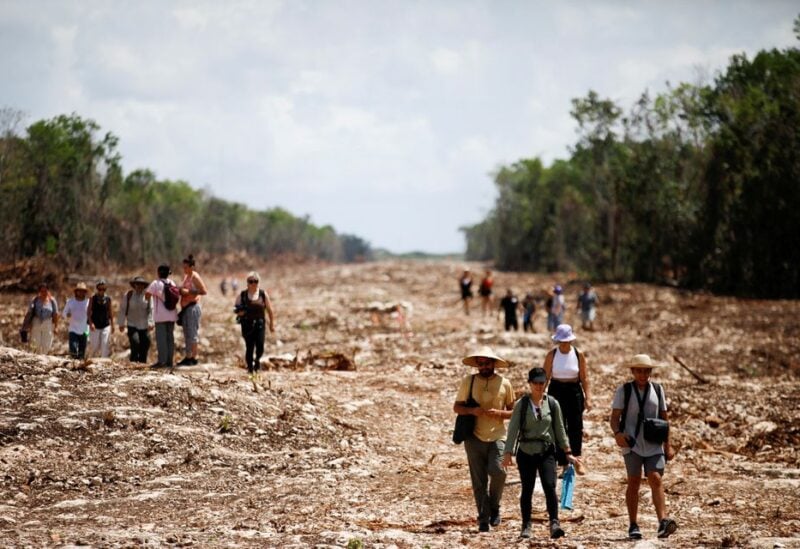 Activists and locals march as they protest at one of the construction sections of the Mayan train due to the environmental impact and the destruction of the jungle caused by the project, in Playa del Carmen, Mexico April 23, 2022. REUTERS/Raquel Cunha

Mexico will temporarily occupy private property in the eastern state of Quintana Roo in order to finish a train project that is one of President Andres Manuel Lopez Obrador’s top goals, according to a weekend decision from the government.

According to the decree, in order to construct the infrastructure for the alleged Mayan Train project, the government will seize 165,250 square meters (1.8 million square feet) in the Yucatan Peninsula municipalities of Solidaridad and Tulum.

Issued in the government’s official gazette, the decree noted the constitution mandates expropriations may only be made for reasons of “public utility” and must offer compensation, and that railways are a priority area for national development.

The multi-billion dollar project which the president hopes will boost local development has been held up by injunctions, with critics saying the 1,470-km (910-mile) line is being pushed through without proper environmental impact studies.

The railway will link tourist locations on the Yucatan peninsula including the resort city of Cancun.

The decree, which will take immediate effect, comes less than a week after Lopez Obrador said the rail project was a matter of national security.