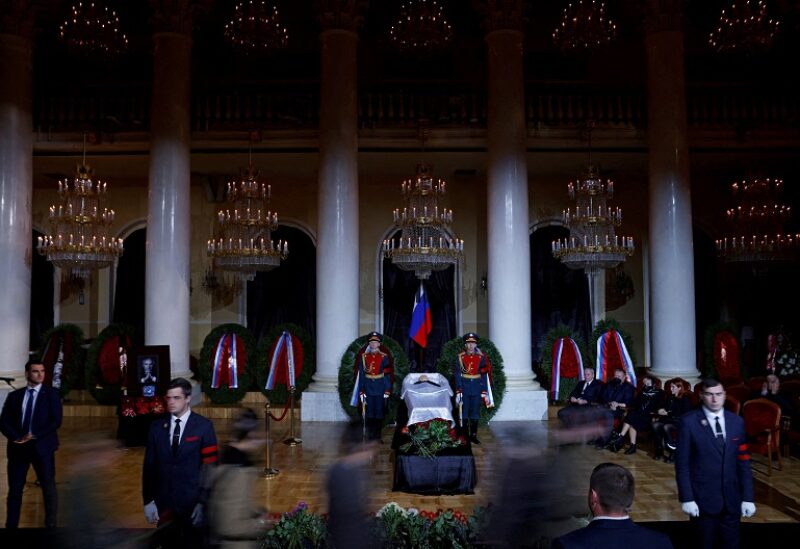 SENSITIVE MATERIAL. THIS IMAGE MAY OFFEND OR DISTURB Honour guards stand by the coffin of Mikhail Gorbachev, the last leader of the Soviet Union, during a memorial service at the Column Hall of the House of Unions in Moscow, Russia September 3, 2022. REUTERS/Evgenia Novozhenina/Pool TPX IMAGES OF THE DAY

Although there was no state funeral, still a long line of people began forming in central Moscow on Saturday morning, past the city’s famous Bolshoi theater and leading into the House of the Unions’ Hall of Columns, where mourners paid their respects to the last leader of the Soviet Union, Mikhail Gorbachev. Ceremonial guards watched over Gorbachev’s open casket as they filed past.
Many of those who come to pay their respects hold Gorbachev in high esteem. Viktoria, a 49-year-old Muscovite, says his tenure represented the best six years of her life. “We came to expect freedom, and the best possible outcome; unfortunately, we could not make use of all this, as they took away all those freedoms.” An elderly man nearby agreed, telling DW: “Sadly, we were unable to preserve his legacy. Everything went wrong. This pains everyone who reveres Mikhail Gorbachev.”
Not everyone in Russia, however, feels such admiration for the late leader. It was in Gorbachev’s time in office, after all, that the Soviet Union collapsed. This tension became clear when one mourner told DW that one should not speak ill of the dead, and that “not everything was bad during Gorbachev’s rule.”

Many Russians across the nation feel conflicted about Gorbachev. They appreciate that he granted them freedoms they could previously only dream of, opened up the Soviet Union and changed many people’s lives for the better. And yet, many believe this came at too great a cost. Indeed, the vast majority of mourners DW spoke to said Gorbachev had allowed their “good old” Soviet Union fall apart.

While many Russians feel nostalgic about the Soviet Union and blame Gorbachev for its demise, people in the former Soviet satellite states accuse him of having refused them independence for too long.

Many remember how the Soviet leader suppressed pro-independence movements in Georgia, Latvia, and above all Lithuania in the early 1990s. It was there, on January 13, 1991, that Soviet forces killed 13 people and injured hundreds in what became known as Lithuania’s Bloody Sunday. Until recently, Lithuanian prosecutors were still trying to bring Gorbachev to justice, though the trial has now been shelved.

Gorbachev likened to prison warden
Lithuania’s Foreign Minister Gabrielius Landsbergis drew attention to this grim chapter when he tweeted: “Lithuanians will not glorify Gorbachev. We will never forget the simple fact that his army murdered civilians to prolong his regime’s occupation of our country. His soldiers fired on our unarmed protestors and crushed them under his tanks. That is how we will remember him.”

Lithuanian President Gitanas Nauseda compared the late Soviet leader to a prison warden who wanted to implemented minor reforms instead of overseeing a major overhaul.
He said these small reforms were not enough, as “prisoners wanted to break free. They did that but against the will of Mikhail Gorbachev.”

On Twitter, Latvian President Egils Levits said his country had gained independence from the Soviet Union against Gorbachev’s will. This was echoed by Foreign Minister Edgars Rinkevics, who tweeted that the “collapse of the USSR was the best moment of the 20th century. The end of the Cold War was great but the killing of people in Tbilisi, Vilnius, Riga is also part of his [Gorbachev’s] legacy. It is up to the History to judge him.”