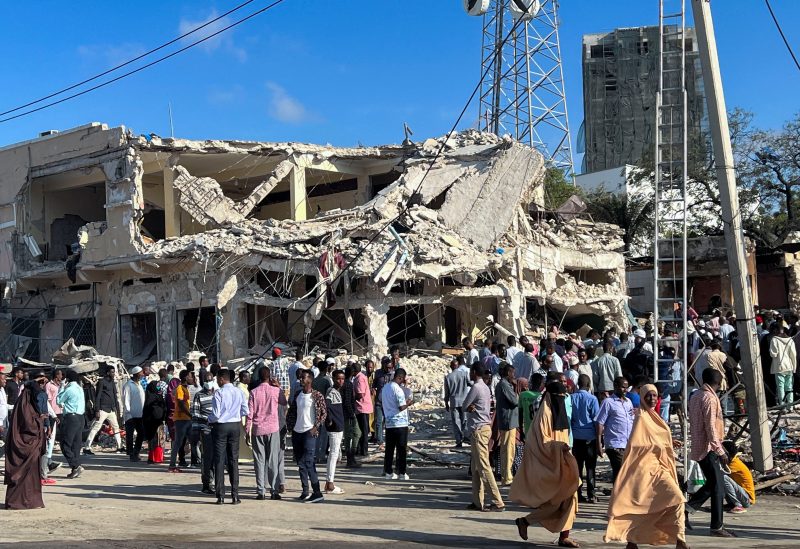 Civilians gather near the ruins of a building at the scene of an explosion along K5 street in Mogadishu, Somalia October 30, 2022. REUTERS/Abdirahman Hussein

Al Qaeda-linked Al-Shabab, which controls large swathes of the country, claimed responsibility for the attack on a hotel used by government officials in Somalia’s capital Mogadishu on Sunday evening, police and witnesses said. Al-Shabab, said in a statement that it was targeting the nearby presidential palace.
“We were shaken by a huge blast, followed by heavy exchange of gunfire,” said Ahmed Abdullahi, who lives close to the scene. “We are just indoors and listening to gunfire.”
The assailants stormed the Villa Rose hotel, which is close to the presidential palace, two police officers told Reuters. It was not immediately clear how many attackers there were, the officers said.
Some government officials at the Villa Rose were rescued after using windows to escape, said Mohammed Abdi, one of the police officers.
The state minister for the environment, Adam Aw Hirsi, wrote on Twitter that he was safe after a “terrorist explosion targeted at my residence” at the hotel, where many government officials stay.
President Hassan Sheikh Mohamud, who was elected earlier this year, has been carrying out a military offensive against Al-Shabab.