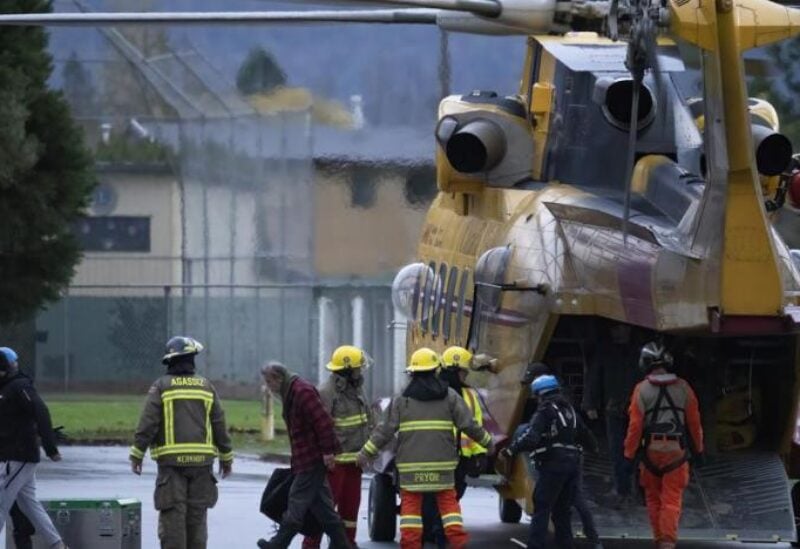 Canada’s military on Thursday joined rescue efforts for flood devastated communities in westernmost British Columbia province, with thousands evacuated from their homes and a number of motorists missing after powerful mudslides.

The Canadian Armed Forces deployed a Hercules transport aircraft, several search helicopters and hundreds of troops to the region, while putting thousands more on standby.

Troops were tasked with “providing assistance with evacuations, transport of emergency response personnel and equipment,” a military spokesman said.

More than 1,000 travelers were stranded by mudslides, rocks and debris between Sunday and Monday in the town of Hope, about 150 kilometers (90 miles) east of Vancouver.

In the early morning, an emergency passenger train carrying about 200 people from the town arrived in Vancouver, Via Rail told AFP.

Many motorists also got through on Highway 7 connecting to Canada’s third-largest city after it was temporarily reopened by emergency crews clearing rocks and debris overnight, the British Columbia transportation agency said.

A video shared by the agency on Twitter showed a stream of vehicles driving westbound along a breakdown lane illuminated by floodlights, past road crews.

A search, meanwhile, continues for more possible victims swept away in a mudslide near Lillooet, 250 kilometers (155 miles) northeast of Vancouver, after a woman’s body was recovered this week.

Federal police say at least four people are still missing in that mudslide — one of several that has effectively cut off Vancouver and its sea port, which handles some 3.5 million containers each year.

In Abbotsford, on the outskirts of Vancouver, hundreds were evacuated from the Sumas Prairie overnight as a pump station risked being overwhelmed by a surge of water carried north from the Nooksack River in the United States, Mayor Henry Braun told a news conference.

But some 40 farmers who “love their cattle” refused to leave in order to care for livestock, he said.

“We are not out of this by a longshot yet,” he said.

A man who gave only his first name, Bill, told AFP a friend with a small sheep farm insisted on “staying in the barn for the night. The rest of his family is gone but he doesn’t want to leave the animals.”

British Columbia Agriculture Minister Lana Popham said thousands of farm animals have died and many more were in “difficult situations,” trapped and facing shortages of food and drinking water.

Most of the area is farmland created by draining Sumas Lake in the 1920s.

The mayor said flood waters in parts of the region had receded over the past 24 hours, but rose elsewhere. He also estimated rebuilding costs in this area alone could be in the hundreds of millions of dollars.

Tyler Richard, who lives near the US border, said he rushed home after getting an evacuation notice on Monday in order to grab whatever he could take with him.

He said hasn’t been allowed to return to assess the damage as the evacuation order remains in effect.

Richard described an “absolutely chaotic” scene. From a distance, he said he could see that “everything was underwater. The street was flooded out. There were motorboats flying around in the park. It was just completely unreal.”

Across the border in Washington State, Dan Tilton said he awoke at 3 a.m. “with water coming up though the floor” in his house in the town of Everson on the Nooksack River.

He told AFP he and his family “started getting everything we could upstairs until the water came into the house then we got out of here.”

As more rain has started to fall after a break in precipitation late Tuesday through Wednesday, Mayor Braun said: “I am not concerned about today’s rain. What I’m concerned about is next week, and what’s coming.”

He pointed to 80 to 100 millimeters (three to four inches) of rain forecast for next week, starting on Tuesday.