‘Misery cannot be measured here’: a struggle for survival in Yemen 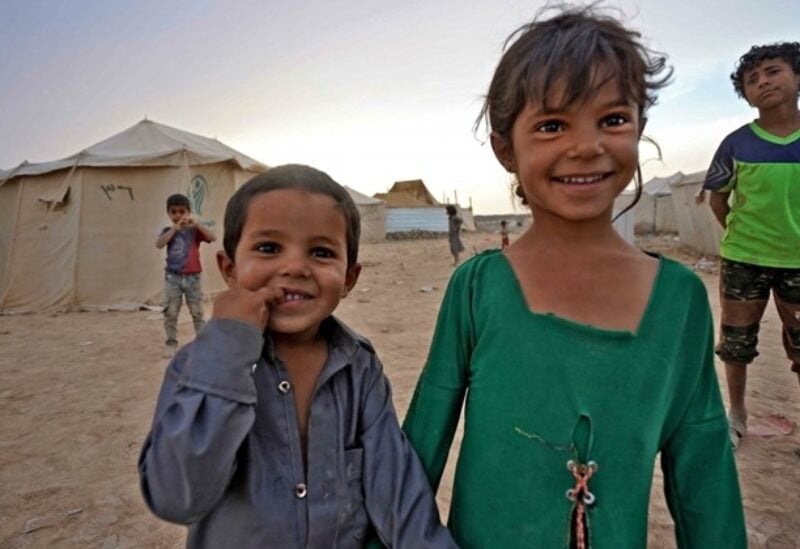 Children look on as they stand near tents at the Suweida camp for people internally displaced by conflict, near Yemen's northern city of Marib, on April 15, 2021. / AFP

SAADA, Yemen: At the end of a treacherous road winding its way between jagged ridges, multiple families have turned a desolate mountainside into a safe haven of sorts from Yemen’s years-long war.

The bedraggled community — tucked inside a Houthi rebel stronghold near the Saudi border in Saada province where battles have raged between the Houthis and pro-government forces — fled their homes 3 years ago.

With their belongings strapped on the backs of donkeys, they kept moving further north under the threat of air strikes and snipers until they stopped hearing any fighting.

That was when they realized the mountainside of the Al-Azhour range would be their new home.

Mattar Ahmed, an official in Saada’s Razeh district, said “they had to flee because of the war… and look for safe areas. They found it here, in this valley, in this place which is completely unsuitable for living.”

“Circumstances have forced them to live in this place despite the harsh conditions. Misery cannot be measured here,” he told AFP.

Yemen’s conflict since 2014, pitting the Iran-backed Houthis against the government supported by a Saudi-led military coalition, has claimed tens of thousands of lives and pushed millions to the brink of hunger.

The United Nations calls Yemen the world’s worst humanitarian crisis, with more than 4 million people displaced and two-thirds of its 30 million population dependent on aid.

In Al-Azhour, over 700 displaced people, many of them children and women, have been living in makeshift tents haphazardly clinging to the mountainside, amongst garbage and puddles of murky water.

With no health facilities nearby and limited access to clean water, they are vulnerable to disease.

Residents of the camp have to travel long distances on foot for basic necessities, with pregnant women and children the most at risk.

“We live between rocks. We don’t have access to clean water,” one resident told AFP as a 4×4 truck carrying three fighters strained to make its way up a steep and bumpy slope through the settlement, which is accessible only with the hardiest vehicles.

Razeh district was a battlefield between the Huthis and the government even before the current conflict broke out in the summer of 2014, when the rebels launched their military campaign by taking over the capital Sanaa.

With no sign of a peace deal, the 100 families on the mountainside are among countless Yemenis who have had to do their best to adapt, hoping to return to their homes one day.

“All the children here are not getting their right to an education, and most of them cannot read or write,” lamented teacher Hadi Jaber.