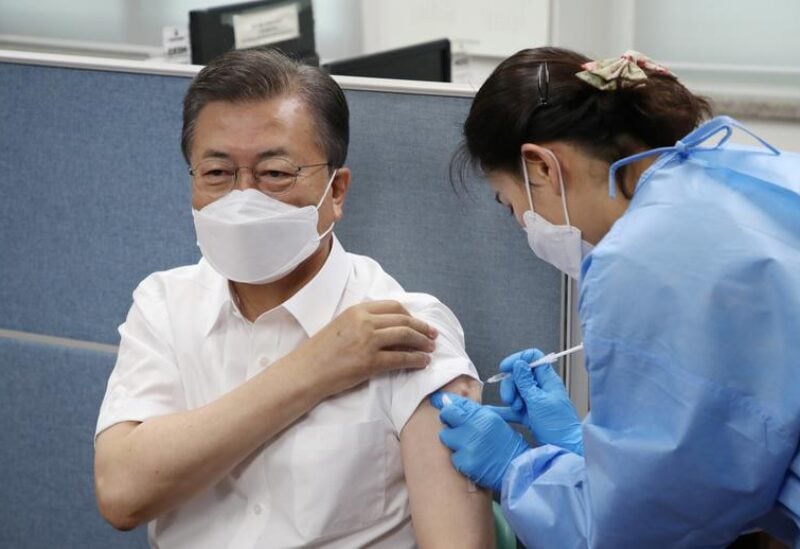 South Korea’s President Moon Jae-in received AstraZeneca’s COVID-19 vaccine on Tuesday ahead of an overseas trip, as the country started inoculating more senior citizens and health workers in an effort to speed up its vaccination drive.

68-year-old Moon got the dose from a community clinic near his office in Seoul to prepare for a planned visit to the United Kingdom for a G7 summit in June.

Moon’s wife and 9 aides who will accompany him on the trip, including National Security Advisor Suh Hoon, were also inoculated, his office said in a statement.

On Tuesday, South Korea’s government started vaccinating around 300,000 people at care hospitals and nursing homes who are 65 or older and medical workers there as it accelerates its vaccination drive.

Nearly 680,000 high-risk healthcare professionals and critically ill people have been inoculated since the campaign began at the end of February, according to the Korea Disease Control and Prevention Agency (KDCA).

Authorities aim to vaccinate almost a quarter of the country’s 52 million population by June and achieve herd immunity by November amid a third wave of the coronavirus.

The KDCA allowed people carrying out a key public mission such as a diplomatic or military task to be inoculated starting this month.

The care facility patients and employees will also get an AstraZeneca shot, the KDCA said, with nearly 77% of the 375,000 eligible agreeing to get it.

Authorities reaffirmed on Monday that they have found no evidence of health risk despite reports of blood clots among those who got inoculated with the AstraZeneca vaccine in Europe.

South Korea authorized the product for people 65 and older this month after delaying its use for that age group, citing a lack of clinical data.

“I’m willing to get an AstraZeneca vaccine first if that helps reassure people so that they feel safe about participating in the campaign,” PM Chung Sye-kyun told a meeting on Tuesday.