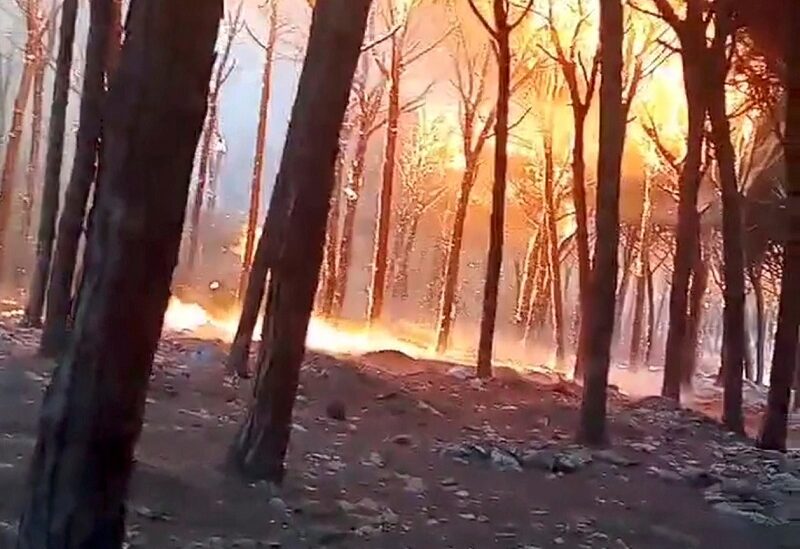 A view shows trees burning during a forest fire in Larache, Morocco July 14, 2022 in this still image obtained from a social media. Mustapha Mhamdi/via REUTERS THIS IMAGE HAS BEEN SUPPLIED BY A THIRD PARTY. MANDATORY CREDIT. NO RESALES. NO ARCHIVES.

11,500 acres were affected by the fires that raged through Morocco on Saturday, and mobilized more firefighters and soldiers to tackle forest blazes in the remote wooded regions in the north of the kingdom, local officials told AFP.
More than 1,320 families have been evacuated from 19 villages in the region, said local officials.
Soldiers had been sent to help fight the fires in Ksar El Kebir, one of the most inaccessible regions.
Hundreds of hectares of woodlands had also been destroyed in the neighboring provinces of Ouazzane, Tetouan and Taza.
Temperatures approaching 40 degrees Celsius (104 degrees Fahrenheit) and high winds have made fighting the fire that much more difficult.
But officials are hoping the reinforcements and a change in weather conditions expected on Sunday may give them some respite.
The North African nation, which is struggling under intense droughts, has in recent days been hit by soaring temperatures approaching 45 degrees Celsius (113 degrees Fahrenheit).
On the other side of the Strait of Gibraltar, fires are also raging in southern Europe, from Spain and Portugal to France