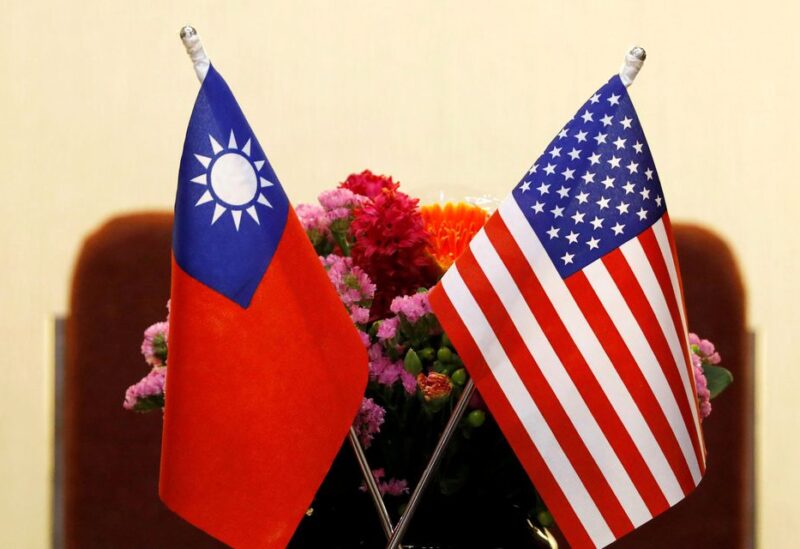 Flags of Taiwan and U.S. are placed for a meeting in Taipei, Taiwan March 27, 2018. REUTERS/Tyrone Siu/File Photo

The third such visit this month and against efforts from Beijing for these trips not to take place, according to Taiwan’s official Central News Agency, will see another delegation of American politicians arrive in Taiwan on Thursday evening.

After U.S. House Speaker Nancy Pelosi arrived in early August, China, which asserts Taiwan as its own territory despite the adamant opposition of the democratically-elected government in Taipei, began conducting military exercises close to the island.

The Central News Agency did not name the lawmakers who were coming on Thursday, saying only that they would arrive on a U.S. military aircraft at Taipei’s downtown Songshan airport and would meet Taiwan’s President Tsai Ing-wen on Friday.

Taiwan’s Foreign Ministry said in a statement that “important guests” would arrive after 11 p.m. (1500 GMT) at Songshan airport. It gave no details and declined to comment further.

The de facto U.S. embassy in Taipei declined to comment.

Pelosi’s visit infuriated China, which responded with test launches of ballistic missiles over Taipei for the first time, and by ditching some lines of dialogue with Washington, including theatre military talks and on climate change.

She was followed around a week later by five other U.S. lawmakers, with China’s military responding by carrying out more exercises near Taiwan.

The United States has no formal diplomatic ties with Taiwan but is bound by law to provide the island with the means to defend itself.

China has never ruled out using force to bring Taiwan under its control.

Taiwan’s government says the People’s Republic of China has never ruled the island and so has no right to claim it, and that only its 23 million people can decide their future.