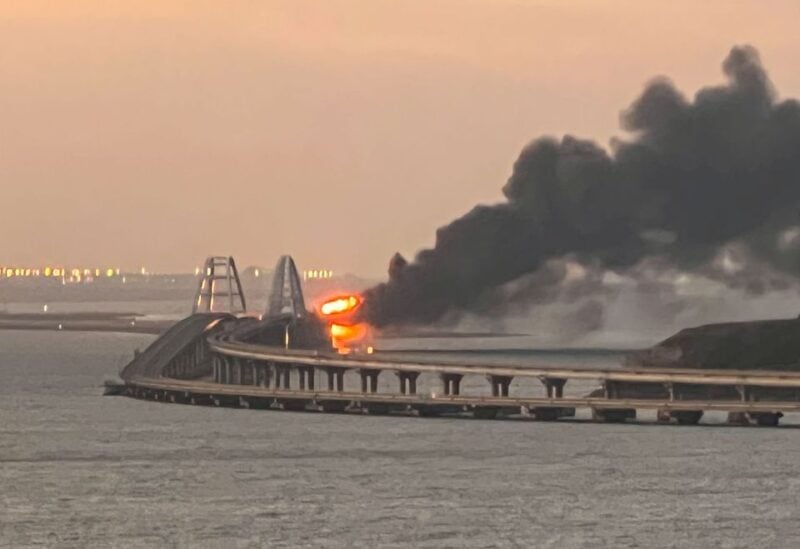 A view shows a fire on the Kerch bridge at sunrise in the Kerch Strait, Crimea, October 8, 2022. REUTERS/Stringer

A blast on the strategic road-and-rail bridge connecting Russia and the Crimean peninsula took down sections of road carrying traffic in one way, eliciting joyful tweets from Ukrainian officials but no formal claim of responsibility.

It now represents a crucial supply route for the Russian forces who have taken control of most of southern Ukraine’s Kherson region.

The Russian National Anti-Terrorism Committee said on social media that the blast occurred at 6:07 a.m. (0307 GMT) in a freight truck, and caused seven fuel tanker wagons to catch fire on a train heading for the peninsula.

It said two sections of road bridge had partially collapsed, but that the arch spanning the Kerch Strait, the waterway through which ships travel between the Black Sea and Azov Sea, was not damaged.

Sergei Aksyonov, the Russian governor of Crimea, said on social media that the road bridge was still intact in one direction, although traffic was suspended while the damage was assessed.

Images showed thick smoke pouring from part of the bridge.

Later, the Emergency Ministry said the fire had been extinguished, the Russian news agency Interfax reported.

A Ukrainian presidential adviser posted a message on Twitter saying the incident was just “the beginning” but stopped short of saying Ukrainian forces were responsible for the blast.

“Everything illegal must be destroyed, everything that is stolen must be returned to Ukraine, everything occupied by Russia must be expelled,” Mykhailo Podolyak wrote.

Interfax quoted the chairman of the Crimean republic’s State Council, Vladimir Konstantinov, as saying that “Ukrainian vandals managed to reach for the Crimean bridge with their bloody hands”.

“They now have something to be proud of,” he said. “In their 23 years of economic activity they failed to build anything worthy of attention in Crimea, but (now) they have managed to damage the roadway of the Russian bridge.”

Konstantinov said the damage was “not of a severe nature” and would be quickly repaired.

The head of Ukraine’s National Security and Defence Council, Oleksiy Danilov posted a video of the burning bridge on social media alongside a video of Marilyn Monroe singing “Happy birthday, Mr President”.