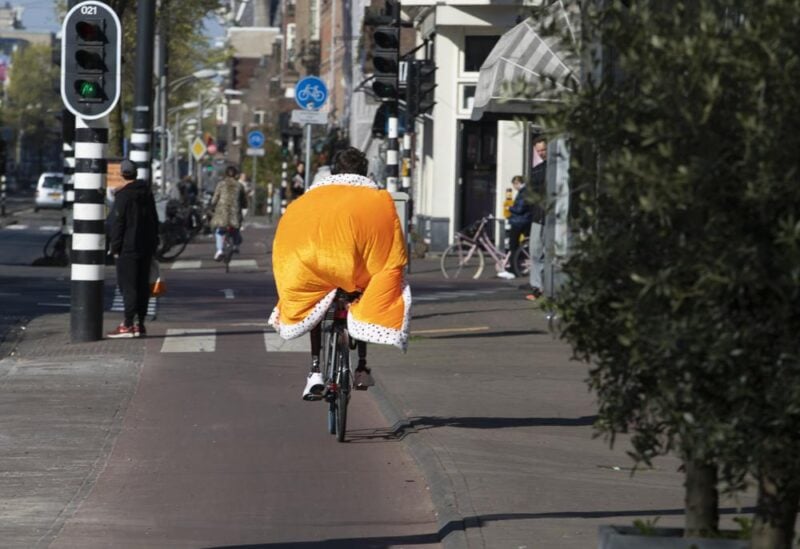 This year, the national holiday comes with lockdown fatigue rising and a day before an easing of some restrictions even though hospitals are having to postpone regular medical procedures so they can focus on the high level of COVID-19 patients.

King Willem-Alexander was marking his 54th birthday in the southern city of Eindhoven, a city that brands itself as a hub for high-tech innovation, for a digital version of the annual royal walkabout.

The King’s Day national holiday is usually an occasion for the Dutch to drape themselves in orange clothes, hats and feather boas, sell old toys and books in street markets and crowd the streets of major cities.

This year, for the second straight year, cities are encouraging people to stay home.

The capital, Amsterdam, urged residents to celebrate according to lockdown guidelines with a maximum of one visitor, but added “you can still dig out the orange T-shirt or silly hat and hang out the flag.”

A man wearing an orange robe cycled down a near deserted street in the city, while people stood in socially distanced lines waiting to buy pastries topped with icing in the national color orange.

The central city of Arnhem, meanwhile, was bracing for possible violent confrontations between football hooligans and a protest against the government.

In an attempt to prevent rioting, the city’s mayor, Ahmed Marcouch, gave police special powers for the day to check people coming into Arnhem and imposed a limit of 500 people for a demonstration at the central market place.

Marcouch said that demonstrations are a constitutional right, but that “signals of the risk of rioting at different locations in the city endanger that right to demonstrate.”

On Wednesday, the national lockdown is being eased with measures including the end of a nationwide curfew imposed in mid-January and cafes allowed to reopen their outdoor terraces — under strict conditions — from noon to 6 p.m.