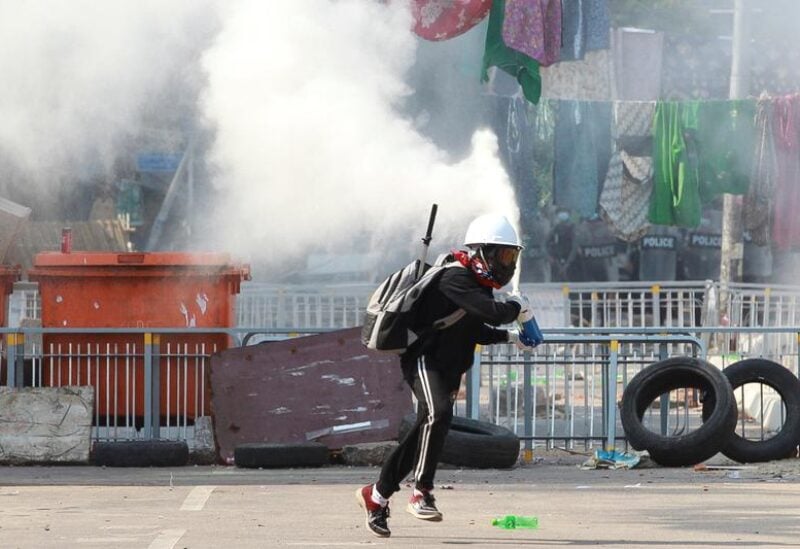 FILE PHOTO: An anti-coup demonstrator sprays a fire extinguisher as he runs away from a barricade during a protests in Yangon, Myanmar, March 9, 2021.

6 people were killed in the central town of Myaing when forces fired on a demonstration, a man who participated in the protest and helped carry bodies to hospital told Reuters by telephone. A health worker there confirmed all 6 deaths.

“We protested peacefully,” the 31-year-old man said. “I couldn’t believe they did it.”

One person was killed in the North Dagon district of Yangon, Myanmar’s biggest city, domestic media said. Photographs posted on Facebook showed a man lying prone on the street, bleeding from a head wound.

Before Thursday’s deaths, the Assistance Association for Political Prisoners advocacy group has said at least 60 demonstrators have been killed and nearly 2,000 people arrested by security forces since the Feb. 1 coup against Aung San Suu Kyi’s elected government.

Joanne Mariner, Director of Crisis Response at Amnesty International, said “these are not the actions of overwhelmed, individual officers making poor decisions.”

“These are unrepentant commanders already implicated in crimes against humanity, deploying their troops and murderous methods in the open.”

A junta spokesman declined to give an immediate comment, but said there would be a news conference held by the military’s council in the capital Naypyitaw at 2 pm. (0730 GMT) on Thursday.

The junta has previously said it is acting with utmost restraint in handling what it describes as demonstrations by “riotous protesters” whom it accuses of attacking police and harming national security and stability.

Protests were also staged in half a dozen other towns, according to Facebook posts.

Overnight, people defied a curfew to hold several more candle lit vigils in parts of Yangon and also in Myingyan, south west of the second city of Mandalay.

On Wednesday, the U.N. Security Council denounced violence against demonstrators and urged the army to show restraint, but failed to condemn the military takeover as a coup or threaten further action due to opposition from China and Russia.