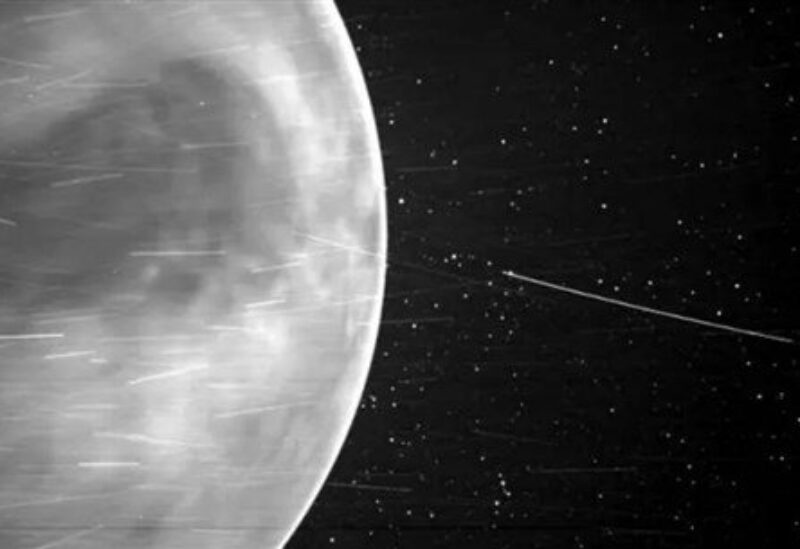 Andrew Griffin wrote the following article in the Independent:

NASA has revealed an astonishing image of Venus, taken by a spacecraft sent out to study the Sun.

The image, taken by the Parker Solar Probe, shows our near neighbor shining brightly – and represented a surprise for the engineers who took it, they say.

As its name suggests, the Parker Solar Probe’s main job is to study the Sun. The car-sized spacecraft is the first to “touch” the Sun.

But other objects in our solar system are key to its mission, too. The probe will fly by Venus seven times, using its gravity to get itself nearer to the Sun.

As it does, it is revealing information about those objects, outside of the Sun. Last summer, it took an astonishing image of Venus on one such flyby, and helped researchers discovered something unexpected about the planet.

When scientists examined the picture – taken of Venus’s nightside, from 7,700 miles away, using the “Wide-field Imager for Parker Solar Probe” equipment mounted on the craft – they were surprised to see that it had captured more than they expected.

The bright rim around the edge of the planet appears to be what is called nightglow, which happens when the oxygen atoms up in the atmosphere recombine to molecules when they’re on the nightside of the planet, and give off light as they do.

At the center of the image is a dark feature, which is Aphrodite Terra, the largest highland region on the planet’s surface. It looks dark because it is cooler than the surrounding region.

“WISPR is tailored and tested for visible light observations,” said Angelos Vourlidas, the WISPR project scientist from the Johns Hopkins Applied Physics Laboratory. “We expected to see clouds, but the camera peered right through to the surface.”

Scientists returned to check how sensitive the instrument was to infrared light. If, as appears, the equipment is able to see near-infrared wavelengths, then it could be even more useful than expected, allowing scientists to study dust around the Sun and in the solar system nearby.

If it is not able to see extra wavelengths, then that will be useful too – the images might represent a whole new way of seeing Venus.

“Either way,” Vourlidas said, “some exciting science opportunities await us.”

The probe went past Venus again this week, and scientists hope to process that data by the end of April.