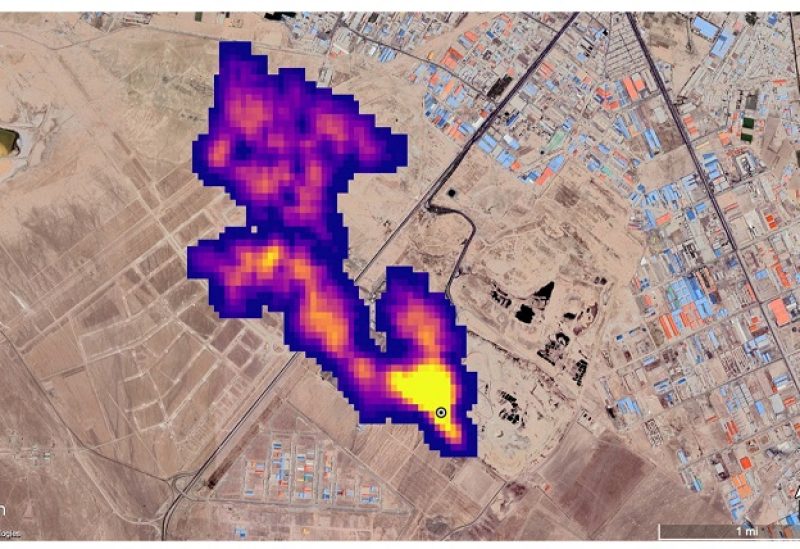 Imaging of a methane plume at least 3 miles (4.8 km) long rising from a major landfill, where methane is a byproduct of decomposition, south of Tehran, Iran, captured by NASA's orbital imaging spectrometer, is overlaid on a satellite photo in this handout image released October 25, 2022. Google Earth/Maxar/NASA/JPL-Caltech/Handout via REUTERS THIS IMAGE HAS BEEN SUPPLIED BY A THIRD PARTY. NO RESALES. NO ARCHIVES. MANDATORY CREDIT

Over 50 places on Earth that are emitting huge levels of methane, were identified by an instrument developed by the US space agency.
While some of them were previously known, others have been newly discovered.
NASA scientists designed the device, called an imaging spectrometer, to mainly study how airborne dust affects climate.
That study, NASA’s Earth Surface Mineral Dust Investigation, or EMIT, will help scientists determine whether the dust in different parts of the world is likely to trap or deflect heat from the sun, thus contributing to warming or cooling of the planet.
But the instrument, which was installed aboard the International Space Station in July, has also shown the ability to detect the presence of methane.
Kate Calvin, NASA’s chief scientist and senior climate adviser, told the AFP news agency that EMIT’s “additional methane-detecting capability offers a remarkable opportunity to measure and monitor greenhouse gases that contribute to climate change.”
The methane hotspots include sprawling oil and gas facilities and large landfills located in Central Asia, the Middle East and the United States.
NASA said a methane plume about two miles (3.3 kilometers) long was detected southeast of Carlsbad, New Mexico, in the Permian Basin, one of the largest oilfields in the world.
It said 12 plumes from oil and gas infrastructure — some stretching over 20 miles — were identified in Turkmenistan, east of the Caspian Sea port city of Hazar.
A methane plume at least three miles long was detected south of Iran’s capital Tehran from a major waste-processing complex, the US space agency said.
Methane is responsible for roughly 30% of the global rise in temperatures to date.
The greenhouse gas is about 80 times more effective at trapping heat than carbon dioxide.
Nevertheless, methane lingers in the atmosphere for only a decade, while carbon dioxide persists for hundreds or thousands of years.
So reductions in methane emissions will likely have a more immediate impact on planetary warming.
NASA said that the instrument could potentially find hundreds of methane super-emitters before the end of its yearlong mission.