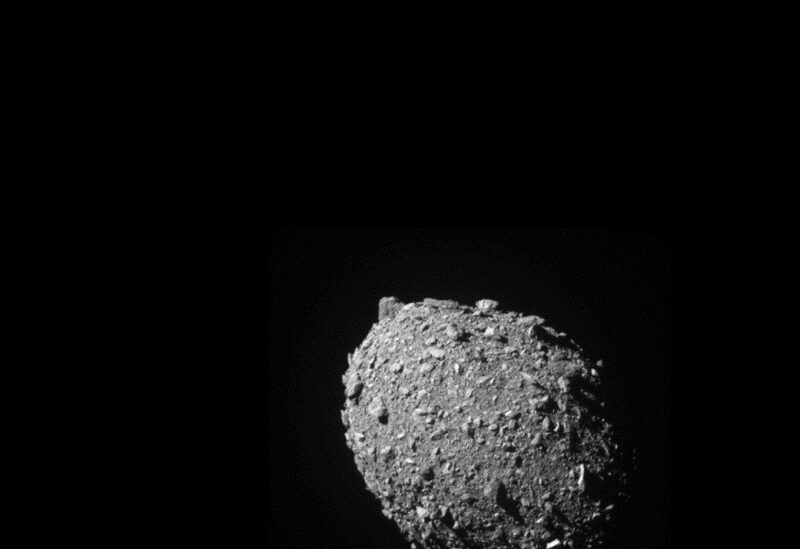 Asteroid moonlet Dimorphos as seen by the DART spacecraft 11 seconds before impact in this image taken by DART’s on board DRACO imager from a distance of 68 kilometers, and released September 26, 2022. NASA/Johns Hopkins APL/Handout via REUTERS THIS IMAGE HAS BEEN SUPPLIED BY A THIRD PARTY

A NASA spacecraft crashed into an asteroid at breakneck speed on Monday, in In an extraordinary rehearsal for the day when a rock threatens Earth.

The spacecraft, named DART, slammed into an innocuous asteroid at 22,500 kph, causing a gigantic slam to occur at 9.6 million kilometres away. The DART stands for Double Asteroid Redirection Test.

The spectacle was observed through telescopes from Earth and space pointed towards the same location in the sky. The primary goal of the collision was to change the asteroid’s orbit. The scientists, however, anticipate that this crash will also create a crater and launch streams of boulders and dirt into space, AP rpeorted.
The USD 325 million mission was the first attempt to move any natural object in space.

A 160-meter asteroid named Dimorphos will be the target on Monday. Meaning “twin” in Greek, it is actually a moonlet of Didymos, a rapidly spinning and five times larger asteroid.

The DART spacecraft, which was launched in November last year and developed by the Applied Physics Laboratory at Johns Hopkins University, was the size of a vending machine. Engineers for missions yelled with excitement.

A little satellite trailed a few minutes later to capture images of the collision. The Italian Cubesat was launched from DART two weeks ago.

Scientists insisted that dimorphous would not be broken by the DART. The asteroid weighed approximately 5 billion kilos, whereas the spacecraft was just 570 kg.

As per NASA, much fewer than half of the projected 25,000 near-Earth objects in the lethal 140-metre range were found.

As it stands, less than one per cent of millions of smaller asteroids have the potential to cause widespread destruction.