NASA’s Palestinian engineer gets ready to make history once again 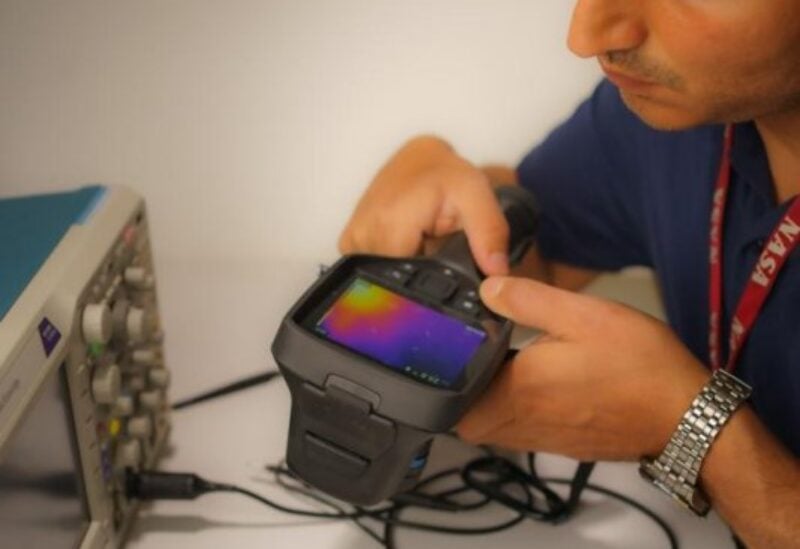 Palestinian electrical engineer Loay Elbasyouni who was part of the NASA team which sent the Perseverance spacecraft to Mars last month, has returned to prominence as the space agency prepares for the first helicopter flight    on Mars later this morning. NASA’s Ingenuity Mars helicopter is just a few hours away from making humanity’s first attempt at controlled flight of an aircraft on another planet.

Elbasyouni is the electronics lead for the helicopter which was landed recently on the Red Planet. If this mission is a success, he and the NASA team will write their names in the history books, just as the Wright brothers did in 1903 with their first powered aircraft flight. Uniquely, though, the NASA project is taking place well beyond the Earth’s atmosphere.

Growing up in the northern Gaza Strip town of Beit Hanoun, Elbasyouni witnessed the First Intifada (1987-1993). His education was in UNRWA schools in Gaza. “This taught me from a young age never to give up because you can achieve what you dream,” he explained.

The challenging environment in his home town taught him creativity, resilience, skills, and characteristics that Gaza demonstrates frequently and then exports to the world. In 1998, he travelled to the United States to study engineering and couldn’t visit Gaza again until 2000. “In fact, that was the last time I was there,” he said.

Although he learnt a lot in Gaza about self-reliance, moving to the US was a shock. “The reality was more difficult than I had imagined. Everything was so expensive, from rent to university fees, so I had to work in many jobs in restaurants and pizza delivery.”

This didn’t stop him from enrolling at university, where his studies led him, eventually, to make his dream come true. There were still obstacles ahead, though, not least the 11 September attacks in New York and Washington.

“After 9/11, life became very hard and I was not able to pay my fees. My dad was not able to help me at all because Israel bulldozed our orange and olive groves.” Elbasyouni had to suspend his second year at university studying engineering. “It took another year of non-stop working to save some money. I also transferred to the University of Louisville.”

It was in Louisville that Elbasyouni finished his Bachelor’s degree in electrical engineering in two years, followed by a Master’s degree a year later. After graduation, he worked in different companies gaining a lot of experience in electric motors and controls.

In 2012 he joined a company working on electric aircraft and ended up working on the Mars helicopter with NASA, where he was given a number of achievement awards. “I was selected to be the electrical lead of the NASA helicopter team. I was responsible for the motor/controller, motor algorithms, servo motor selections, servo controllers, and all wiring and communication between that and the main warm box.” In short, he said proudly, “I developed the inverter and servo controllers of NASA’s Ingenuity Mars helicopter.”

After NASA landed its fifth robotic rover, Perseverance, on the surface of Mars on 18 February, social media activists in the occupied Palestinian territories, especially in Beit Hanoun, expressed their own great pride in Elbasyouni’s achievement. International and local media all covered the story of this Palestinian engineer from the besieged Gaza Strip. Elbasyouni’s photograph is on every wall, it seems, in his hometown of Beit Hanoun. “I was surprised at the reaction, especially in Gaza. Palestine is my home. We still own land and houses in Gaza.”

Elbasyouni interacts well within NASA and his local community in the US, where he is known to come from occupied Palestine. “My team is very multinational and we all accept each other despite the differences.”

Despite Elbasyouni being away from Gaza for more than 20 years, he is aware of what happens there under the Israeli-led siege. His love and feeling of responsibility for his homeland are undiminished, despite the distance and years that separate him from Palestine. He works hard to represent his homeland and help it.

“I’m very active in our Palestinian cause. I’m a volunteer with several NGOs which help people in Palestine; in education and other fields, for example. During the military offensives against Gaza, I was on the front line of protests and I have even talked to the US Congress to help in any possible way”.

Palestinians in the diaspora have taken their place alongside some of the world’s greats in many fields. Their achievements are many. Now Loay Elbasyouni, a boy from the Gaza Strip, is hitting the heights, literally, with NASA. His achievements with the Mars exploration programme will surely not be his last.