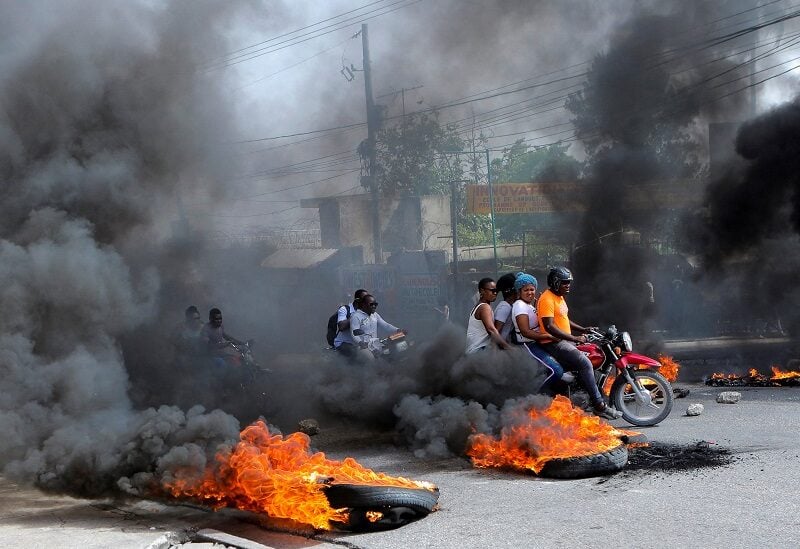 Motorcycle drivers pass through a burning road block as anger mounted over fuel shortages that have intensified as a result of gang violence, in Port-au-Prince, Haiti, July 13, 2022. REUTERS/Ralph Tedy Erol REFILE - QUALITY REPEAT

89 people at least were killed in Haiti’s week of gang violence, according to a rights group said Wednesday, as soaring prices, fuel shortages and gang warfare accelerate a brutal downward spiral in the security situation in Port-au-Prince.
The unrest erupted on July 7 between two rival factions in Cite Soleil, an impoverished and densely populated neighborhood of Port-au-Prince.
As gunfire crackled in the slums for nearly a week, police, short-staffed and ill-equipped, did not intervene, while international humanitarian organizations struggled to deliver crucial food supplies and provide medical care to the victims.
Thousands of families living in the slums that have sprung up here over the past four decades had no choice but to hide inside their homes, unable to fetch food or water — and, with many houses made of sheet metal, dozens of residents fell victim to stray bullets.
“At least 89 people were killed and 16 others are missing” in the past week’s violence, the National Human Rights Defense Network said in a statement, adding that another 74 people sustained gunshot or knife wounds.
Mumuza Muhindo, head of the local mission of Doctors Without Borders, on Wednesday urged all combatants to allow medics to safely access Brooklyn, an area of Cite Soleil most affected by the violence.
Despite the danger, Muhindo said his group has operated on an average of 15 patients a day since last Friday.
He said his colleagues have seen burned and rotting corpses along a road leading to the Brooklyn neighborhood, possibly either gang members killed in the clashes or people trying to flee.
“It’s a real battlefield,” Muhindo said. “It’s impossible to estimate how many people have been killed.”
Cite Soleil is home to an oil terminal that supplies the capital and all of northern Haiti, so the clashes have had a devastating effect on the region’s economy and people’s daily lives.
Gas stations in Port-au-Prince don’t have any gas to sell, causing prices on the black market to skyrocket.
Outraged, motorcycle cab drivers built barricades on some of the city’s main roads on Wednesday, and residents were only able to make short trips by motorcycle within their neighborhoods, according to journalists on the scene.
That further complicates their already dangerous situation: for the past several years, Haiti has seen a wave of mass kidnappings, as gangs snatch people of all walks of life, including foreigners, off the streets.
Emboldened by police inaction, gangs have become increasingly brazen in recent weeks. At least 155 kidnappings took place in the month of June, compared to 118 in May, according to a report released by the Center for Analysis and Research in Human Rights released Wednesday.
The crushing poverty and widespread violence is causing many Haitians to flee to the Dominican Republic, with which Haiti shares a border, or to the United States.
With no money and no visas, many of them risk their lives by boarding makeshift boats in the hopes of reaching Florida.
Many end up in Cuba or the Bahamas, or are stopped at sea by American authorities and returned home.
More than 1,200 undocumented migrants were sent back to Haiti in the month of June alone, according to government figures.
When they return, they have to face the poverty they tried to escape and annual inflation of 20 percent, with economists warning that that it could spike further to 30 percent because of the global reverberations of Russia’s war in Ukraine.
“We are seeing a significant increase in hunger in the capital and in the south of the country, with Port-au-Prince hit the hardest,” Jean-Martin Bauer, director of the World Food Program, said on Tuesday.
Nearly half Haiti’s 11 million residents already face food shortages, including 1.3 million who are facing a humanitarian emergency, which precedes famine, according to UN calculations.
But the violence interferes with efforts to help them also: already the WFP, trying to bypass areas of Port-au-Prince, seeks to deliver aid to the south and north of the country by air and sea.